Eggs - they really are good for you

For any lingering controversy regarding eggs and cholesterol and heart disease, this new study reveals a considerable association between egg eating and a reduction in cardiovascular disease. 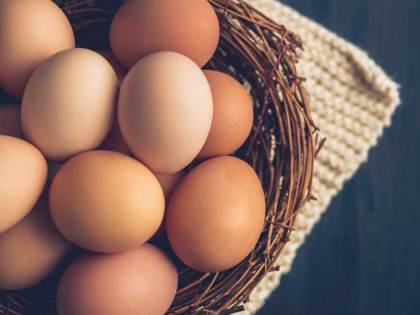 Association Between Egg Consumption and Risk of Cardiovascular Outcomes: A Systematic Review and Meta-Analysis
Abstract

Conclusions:
Our analysis suggests that higher consumption of eggs (more than 1 egg/day) was not associated with increased risk of cardiovascular disease, but was associated with a significant reduction in risk of coronary artery disease.
The above from here
h/t Diabetes Diet blog here
Do you enjoy eating eggs? We certainly do in our house and after reading the above you may be looking for a nice recipe to use some eggs! So, here's one, it's a Breakfast Casserole, low carb / keto and vegetarian, more details here Dear reader, you will find a variety of articles, studies and recipe ideas within this blog, and not all may be suitable for you. If you may have any food allergies, or underlying health issues these must always be taken into account. If you are a diabetic and not sure how certain foods may affect your blood sugars, test is best, i.e. use your meter.
All the best Jan

Posted by Lowcarb team member at 01:00

...my day starts with eggs!

I love eggs, good to know this information.

this is very good news because yes I do like eggs, we do tend to eat them for for dinners than breakfast.

They are good for us - and an incredibly versatile addition to our diet too.

Delish. eggs are good for us.

My family loves eggs. I think the egg is the most versatile food on the planet!

I love eggs, I'm having fried eggs and spinach again today for my lunch! Valerie

i had obsession with eggs from childhood to late teenage ,sometimes i feared that that will result in some disease in future but all went well by the grace of Lord!

i still love eggs but no more favorite eating alas
but lets keep eye on the filled part right :)
blessings to you and family!

I love scrambled eggs with a passion. Three for breakfast is just about right. My father cursed a bit when we told him eggs were bad for him. He did from pancreatic cancer. The doctor, at one point, said that the only thing keeping him alive was a strong heart. He lived 19 months with pancreatic cancer and refused treatment. I will continue to eat scrambled eggs, boiled eggs, and eggs in dishes.

At Home In New Zealand said...

Great to know this about eggs. I am now going to have eggs for breakfast tomorrow instead of my usual muesli.

Good news! I eat almost daily 1 boiled egg in the morning. Eggs are essential food and essential ingredient in baking and cooking.

This is good news. I tend to eat at least two a day (scrambled or with a veggie omelet) plus others that might end up in pastries, etc.

I'm definitely an egg person, and found this article to be quite informative and important. Thanks a bunch and Happy Friyay! RO

I love eating eggs in all its forms.
The casserole looks delicious.
Hugs and greetings.

Eggs are so versatile, and so delicious!

I also love eggs and was most impressed with this article, Jan.

We like eggs. Free range. We are so very glad to have this information. Thank you!!

Yes, we eat eggs, not every day but we do enjoy them!!

Good news about eggs. My husband eats a lot of them. I like mine in egg salads. yum.

I adore eggs! I'm so glad they're good for us!

I always have pickled eggs. And in other versions, too. Sadly Hubby doesn´t like them...

Thank you. This is very nice to know.

i enjoy eggs and eat them often for breakfast. BUT on any given day this information can go the other way, i just tend to eat what i enjoy!!!

I enjoy eggs too and great for cooking and baking. They are the main reason I couldn't go fully vegan.

I tend to forget about eggs, which is a shame, since they're both easy and good for me.