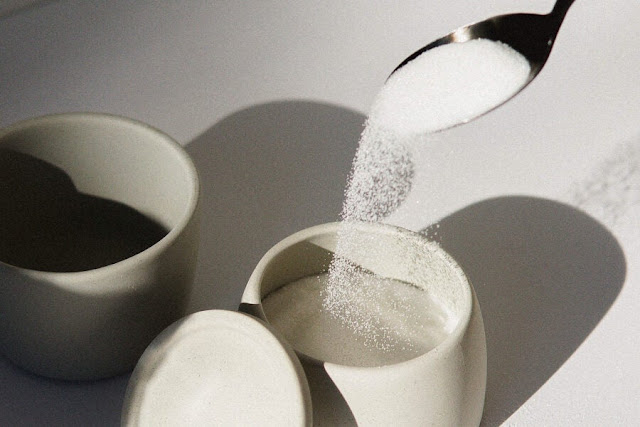 From The Harvard Gazette:
"Reducing sugar in packaged foods can prevent disease in millions
A new health and economic model clearly shows why it’s imperative that food manufacturers reduce the amount of added sugar in their products

Cutting 20 percent of sugar from packaged foods and 40 percent from beverages could prevent 2.48 million cardiovascular disease events (such as strokes, heart attacks, cardiac arrests), 490,000 cardiovascular deaths, and 750,000 diabetes cases in the U.S. over the lifetime of the adult population, reports a study published in Circulation.

A partnership of more than 100 local, state and national health organizations convened by the NYC DOH, the NSSRI released draft sugar-reduction targets for packaged foods and beverages in 15 categories in 2018. This February, NSSRI finalized the policy with the goal of industry voluntarily committing to gradually reformulate their sugary products.

Implementing a national policy, however, will require government support to monitor companies as they work toward the targets and to publicly report on their progress. The researchers hope their model will build consensus on the need for a national-sugar reformulation policy in the U.S. “We hope that this study will help push the reformulation initiative forward in the next few years,” says Siyi Shangguan, lead author and attending physician at MGH. “Reducing the sugar content of commercially prepared foods and beverages will have a larger impact on the health of Americans than other initiatives to cut sugar, such as imposing a sugar tax, labelling added sugar content, or banning sugary drinks in schools.”

Ten years after the NSSRI policy goes into effect, the U.S. could expect to save $4.28 billion in total net health care costs, and $118.04 billion over the lifetime of the current adult population (ages 35 to 79), according to the model. Adding the societal costs of lost productivity of Americans developing diseases from excessive sugar consumption, the total cost savings of the NSSRI policy rises to $160.88 billion over the adult population’s lifetime. These benefits are likely to be an underestimation since the calculations were conservative. The study also demonstrated that even partial industry compliance with the policy could generate significant health and economic gains.

The researchers found that the NSSRI policy became cost-effective at six years and cost-saving at nine years. The policy could also reduce disparities, with the greatest estimated health gains among Black and Hispanic adults, and Americans with lower income and less education — populations that consume the most sugar as a historical consequence of inequitable systems.
“Reducing the sugar content of commercially prepared foods and beverages will have a larger impact on the health of Americans than other initiatives to cut sugar, such as imposing a sugar tax, labelling added sugar content, or banning sugary drinks in schools.”
— Siyi Shangguan, lead author

Product reformulation efforts have been shown to be successful in reducing other harmful nutrients, such as trans fats and sodium. The U.S., however, lags other countries in implementing strong sugar-reduction policies, with countries such as the UK, Norway, and Singapore taking the lead on sugar-reformulation efforts. The U.S. may yet become a leader in protecting its people from the dangers of excessive sugar consumption if the NSSRI’s proposed sugar-reduction targets are achieved. “The NSSRI policy is by far the most carefully designed and comprehensive, yet achievable, sugar-reformulation initiative in the world,” says Shangguan.

Consuming sugary foods and beverages is strongly linked to obesity and diseases such as type 2 diabetes and cardiovascular disease, the leading cause of mortality in the U.S. More than two in five American adults are obese, one in two have diabetes or prediabetes, and nearly one in two have cardiovascular disease, with those from lower-income groups being disproportionately burdened.

“Sugar is one of the most obvious additives in the food supply to reduce to reasonable amounts,” says Dariush Mozaffarian, co-senior author and dean of the Friedman School of Nutrition Science and Policy at Tufts University. “Our findings suggest it’s time to implement a national program with voluntary sugar reduction targets, which can generate major improvements in health, health disparities, and healthcare spending in less than a decade.”"
The above words and picture from here
h/t Marks Daily Apple here
Related Reads
You Can Successfully Cut Down Sugar In Your Diet In Four Easy Steps, see here
Public Health England publishes third annual report on industry action to reduce sugar levels in products that contribute most to children’s sugar intakes, read it here

You will find a variety of articles, studies and recipe ideas within this blog, and not all may be suitable for you. If you may have any food allergies, or underlying health issues please take these into account. If you are a diabetic and not sure how certain foods may affect your blood sugars, test is best, i.e. use your meter.
All the best Jan
Posted by Lowcarb team member at 00:24

For myself, reducing packaged foods is the way to go.

...sugar sure is addictive!

Hello Elizabeth, many thanks for sharing your thoughts above.

Reading your comments, I remembered an older post about Low Carb Eating on a Budget, find it here
https://thelowcarbdiabetic.blogspot.com/2015/01/low-carb-eating-on-budget.html

Package food even for health reason to give or cut back. They add plenty to our land field.
Coffee is on and stay safe

Good advice, sugar can cause so many illnesses. Have a great weekend, Valerie

i loved deserts etc until some years ago ,now only thing we add slight sugar is tea :)

I can honestly say that I cook most things and if buying packaged food which is not often I always forget to take my glasses to read how much sugar is present.

Great advice here, dear friends!
I have been reducing my sugar intake for years now, and it has certainly reduced some of my health issues.
Many thanks for sharing this invaluable information.😊😊

Have a great weekend, and it is rumoured to be a good one weatherwise?😉

Very important message
There was a time I bought about one bag of sugar a year. Need to get back to that.

Sugar and Salt are Killers. One can buy an item whose label says no sugar added. With salt it's more difficult as salt is the main preserving agent in shelf food.

It would be great to have less sugar in our foods, I think if you slowly started reducing it people wouldn't notice because sometimes with busy schedules it is nice to have convenient foods to cook but you don't want that extra amount of sugar and sodium

Well that sounds like a plan doesn't it! I think the only way to cut it out is to make everything from scratch. Have a great weekend Jan & Eddie xx

Excellent post. I don't think anything will change any time soon. People need to read labels and purchase accordingly. Only then, when the products dont sell, will the manufacturers get the message. Government interference and rules wont work. History shows that. Just look at the trans fats. They are still allowed, just much less. And so many loopholes. Read labels. Learn the "secret words", like dextrose, maltose, sucrose, fructose, lactose (milk sugar), etc. Sneaky ways to get the "taste good" sugar in. Care about your health. Income should not be a factor. Use food stamps for fruit instead of candy bars. Put down the chips and the cola drinks, and drink water. It's life giving.

Really interesting study and results. The do make a great deal of sense. I wish I hated sugar. I swear it's addictive!

Thank you for the information. I try to use maple syrup and honey as a substitute.
I no longer drink soda.. I have not for years. In fact I do not like a lot of sweet anymore.

Love the picture...and the message..

Hi Jan, I’ve been aware of the effect of added sugar but I sure didn’t realize it makes this much difference. This is an eye opener! Sure appreciate you sharing this information. And also, thank you for the link to how we can successfully cut down sugar in our diet in four easy steps! You recently left me a kind comment on my blog and mentioned these delightful September days as we move away from the summer heat. I am so with you on that! :-) I hope you and Eddie will enjoy the days ahead. Take good care and be well. John

Yep, I've reduced my sugar intake a lot. I use artificial sweetener now most times.

We try to make and consume homemade foods instead of the store bought foods. İnformation about the sugar you shared in this post very interesting and correct. We should decrease it or get rid of it soon. Thanks för the informative post. Happy Sunday.

Thanks for sharing! I didn't know that sugar caused such sicknesses.

Reduction of sugar in processed foods is a great idea, and one of the reasons I stay away from most processed foods; but the consumption of bagged or boxed sugar in the United States is staggering. Only education, maybe, will lower those figures, but I don't see the possibility of Americans giving up sugar for cooking happening anytime in the future. What do you think?

A very important and informative post Jan. Thank you so much for sharing it.

The less packaged foods you buy the better!!

I'm really trying hard to reduce my sugar intake because I know it's bad for me.

stops the high consumption of sugar in all the ready meals and juices, etc., I hope it will get better soon, but it takes much too long for our health to consume it.
Thanks for this important information!
Greetings Elke

It is unreal how much rubbish they put into food these days! Our food standards here in the UK are shocking I think!The amount of E numbers that should be banned and aren't! Never really been a big sugar fan and don't crave it! Someone once put a little sugar into my coffee...was horrid couldn't drink it haha!

Processed food and added sugars are not good. We haven't evolved to eat them. Thanks for this informative post!

I'm a sweet tooth, but I'm really trying to cut down on it.
It's not good too much sugar.

All the best,
Hilly

I grew up with sweet tea -_very_ sweet tea. It's easier for me to cut out particular things gradually. That 4-step link you shared is good. And fruit helps. It's sweet enough without added sugar to serve as dessert.

Very interesting and vital information. Thank you. Unfortunately sugar can also be addicting which just adds to the problem. I find when I eliminate sugar but not fruit, my cravings are eliminated. However, when I eat sugar- I 'm always craving it. Eating processed foods which lots of sugar, salt, and other additives has certainly added to the rise in disease.