Checking into twitter yesterday, I saw the tweet below, my first thought was, this is an April fools joke surely. 1.8 million kilo's of weight loss, how did they ever come up with that number? The outfit I call the forum of flog, appears to have problems understanding numbers. From the main site front page today. "Get support from 231,354 people" and "Join 552,285 members today and get a free member pack" so, how many members have they got? 231,354 or 552,285? More importantly, how many are active, a single number percentage I reckon.

Joining the forum of flog has much in common with the Hotel California "You can check in anytime you like, but you can never leave" The mailshot below was received by Graham yesterday, a member of our team here, and banned from the flog years ago. We know of many other long since banned members on the mail shot list, long since banned or left, who no-doubt are included in the "numbers" 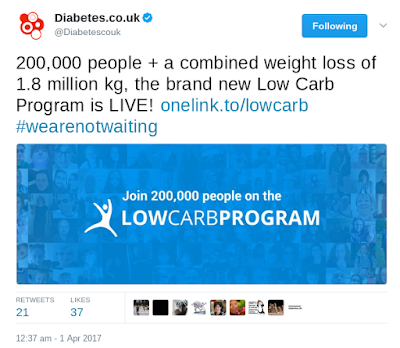 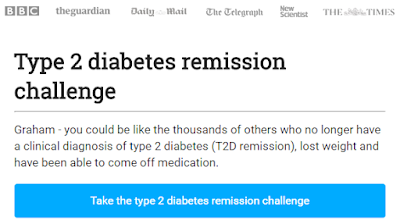 Graham is one of the many type two diabetics who has never been over weight, in fact losing weight is the last thing he needs.

I notice the Coventry Telegraph is not mentioned in this more accomplished than usual mail shot to the masses "One of the ways the website makes money is by charging to put organisations such as pharmaceutical companies doing medical trials in touch with forum members who have diabetes" Arjun Panesar forum owner Coventry Telegraph 3/8/2015.

Not so long ago the Sales Manager Barry Summers was stating publicly "We are interested to hear from investors, M&A groups, strategic partners, health insurance or pharmaceutical companies who have an interest in improving outcomes in the management and control of diabetes throughout the world. An ideal turn key beyond the pill distribution channel" This was swiftly deleted when quoted on the low carb diabetic blog.

Now we see the flog is trumpeting "able to come off medication" precisely what so many flog banned member's were confirming years ago. How times change, it appears a tie up with big pharma may not be as profitable as once envisaged. The last thing big pharma wants to know, is an outfit helping to reduce the massive amount of money spent on  unnecessary diabetes drugs. We do know they pay well for private and confidential information, as confirmed by Mr. Panesar

It would be very unfair of me, to claim the forum has not done a huge amount of good. In the early days it helped me and many of my diabetic friends. It continues to help countless people. How tragic so many people in need of sound advice (advice the management are now shouting from the roof tops) were railroaded off the forum, by a corrupt few, while the management turned a blind eye. How many more could have been helped? we will never know.

What a great pity that for so long highly knowledgeable people, such as Dr. Jay Wortman the low carb expert and type two diabetic, was banned not once, but twice, and said on his blog "Not only banned totally expunged" When the award winning Doctor Unwin joined the forum, he was written off as a troll by a long term member. So much ridicule of medical professionals, on the low carbers side, has been allowed to stand for years.

But let us never forget. The forum members supply around 99% of the forum content for free, and the mods work unpaid. Meanwhile, Panesar's parasites appear to be claiming the glory.

"For over a thousand years Roman conquerors returning from the wars enjoyed the honour of triumph, a tumultuous parade. In the procession came trumpeteers, musicians and strange animals from conquered territories, together with carts laden with treasure and captured armaments. The conquerors rode in a triumphal chariot, the dazed prisoners walking in chains before him. Sometimes his children robed in white stood with him in the chariot or rode the trace horses. A slave stood behind the conqueror holding a golden crown and whispering in his ear a warning: that all glory is fleeting.


As always, the forum management are most welcome to comment here.

A comment by the management acknowledging their low carb program is what so many of us argued and got banned for (myself included) would not go amiss. I don't expect an apology but taking the credit for other people's hard work and dedication really really pisses me off. Take care Eddie.

"Truth without freedom, without the freest possible space in which to debate and doubt and blaspheme, is not truth at all" - Milton.

“Long is the way. And hard. That out of hell leads up to light”

Ain't that the truth.

"A comment by the management acknowledging their low carb program is what so many of us argued and got banned for (myself included) would not go amiss. I don't expect an apology but taking the credit for other people's hard work and dedication really really pisses me off. Take care Eddie"

Thanks for the comment and kind words. I have not forgotten how hard you worked at the flog to help others. I have also not forgotten your son known as Pneu ex forum mod who left in disgust (of his own accord) at the way many people were treated. Even his leaving post to the forum members was swiftly deleted, we have a copy as you would expect.

"I can no longer be a member let alone a moderator of a forum whose administration team have consistently shown poor management, questionable moral judgement and a lack of any sort of thought through decision making.. We have a forum that is being administrated by two young adults who lack the appropriate skill set / experience to act decisively.

DCUK have members that are having to resort to legal action against other members to stop bullying and personal attacks and the administration team have done nothing.. DCUK have a moderator (Daisy) who has been implicated by multiple users as actively targeting them and directing them to ABC Diabetes so that they can be caught up and manipulated.. the end result of which was a terminally ill man being harassed to his death bed and other members seeking legal advice re: DCUK; what have they done? NOTHING.. DCUK have an administration team that has totally lost contact with the day to day feeling of general forum members; promoting a moderation approach that stifles meaningful discussion and treats members like children... two examples today where the overwhelming feeling in the thread was totally ignored and the threads moderated / closed.

Today DCUK banned / threaten certain members who are active contributors with previous good behaviour for doing nothing but voicing a harsh yet TRUTHFUL fact that diabetes does kill... members who have actively support said community over the past six months... the sort of members that DCUK should be protecting and nurturing in order to ensure a strong community going forward. If contributors can't tell the truth, if posts are removed or edited for presenting the harsh yet frank reality of diabetes and life then what is the point of a discussion forum? If people can't have a view then why should they bother? why don't we just redirect the website to DUK...

Anyway that's me done with DCUK

Best Regards To All

I sincerely hope you and yours are doing well.

Francisco translation:
A very interesting and enlightening article.
A hug and a good week.