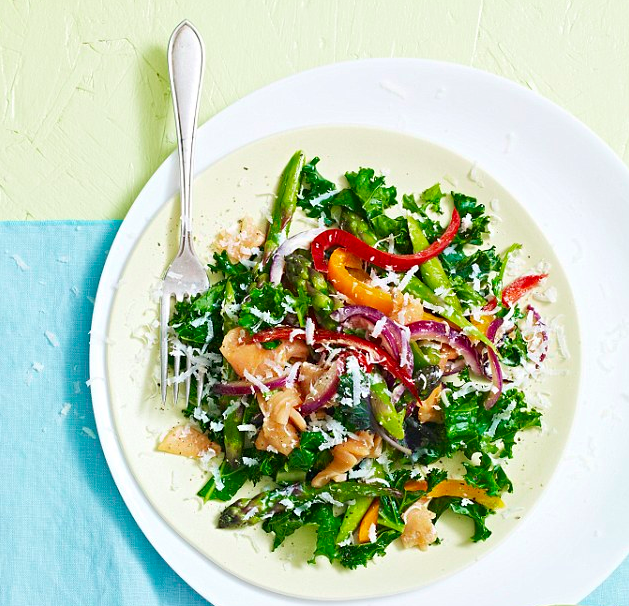 This is such a lovely, simple recipe idea from Karen Thomson ... and I love the grated Parmesan on top! How about you?

Method:
Stir-fry the vegetables until they are slightly soft.
Add the salmon and cream cheese and season to taste.
When everything is cooked through, top with grated Parmesan cheese if desired. Serve, and enjoy.

I love to have Parmesan Cheese (or similar) in the house, there are so many recipes where it just gives that extra zing!

Here is the History of Parmesan Cheese:

All the best Jan
Posted by Lowcarb team member at 12:33

Yum! Sadly, hubby cannot have any dairy, so I have to refrain from that for his plate!
(ツ) from Cottage Country Ontario , ON, Canada!

Looks delicious and thanks for the research on Parmesan, interesting.

Salmon is one of my favourites...but I like it just the way it is without any added flavourings.

Sounds wonderful, and thanks for all the explanations. Hugs, Valerie

It looks very tasty but I'm not a lover of salmon so I'd substitute that. I do love parmesan though.

That looks really good. I'd have to use a different cheese since I don't like parmesan. I'm finding so many great recipes here. Thanks.

I love simple recipes, and grated Parmesan on just about everything:)

That looks yummy! I think it might work without the salmon, or I could think of something to substitute for it, but it looks elegant and delicious.

Oh my gosh! This looks so utterly delicious!!!


That looks delicious, it's well presented.

this looks so very good!!! i love cheese too!!!

Being a pescatarian this is great dish, cheers Jan.

So yummy! Thanks Jan! Big Hugs!