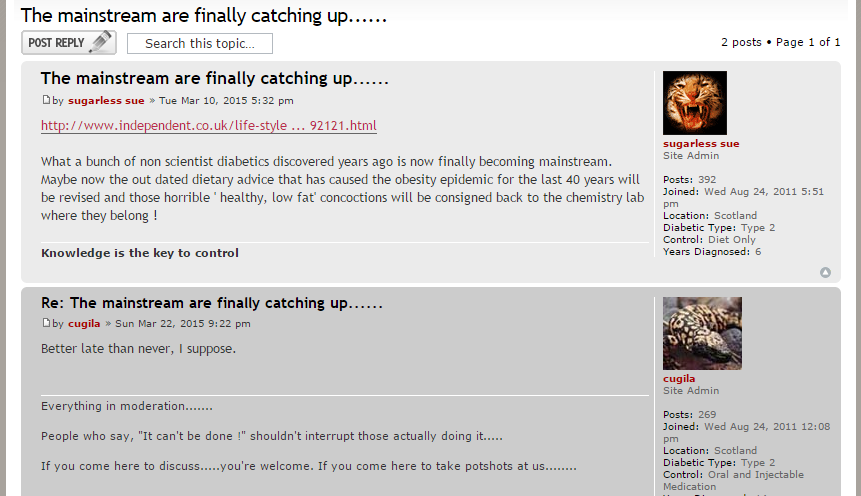 All the old timers at the DCUK forum also known as the flog, will never forget the moderator Cugila, after a bit of handiwork by me and Graham and some help from Jimmy Moore, we organised Cugila's exit visa at the big one. Without doubt, the most oafish buffoon ever given the tiller of a diabetes forum. Countless low carbers were banned in Cugila's days and he took pleasure in deleting many thousands of low carb posts. Editing of members posts and thread locking was turned into an art form. He ruled with an Iron fist, he knew all the answers. The slightest criticism of his fiefdom was ruthlessly dealt with, usually backed up by chief henchman Sid Bonkers, together with Nobblyhead and the Cherub (current flog mods) and very often assisted by his technical adviser, Phoenix. Although Cugila claimed to be low carb, he claimed to be low everything, especially fat. Fat was Satan's work and to be avoided at all costs. When Dr Jay Wortman joined the flog and stated Cugila's stated diet was unsustainable, once weight loss had been achieved, Cugila banned Jay almost immediately. It was the start of the end for the Stalanistic mod. He was demoted to the rank of ordinary member, this was too much for the once mighty one. He done his best to disrupt the forum, then stalked off into the night.So, why bring up the subject of Cugila again? Because he started his own forum ABC diabetes, it was a disaster, and has been as dead as a doornail for months. Then low and behold, a couple of posts get posted, and as you can see Cugila and his Moll have done a complete 180. Now, if we can convince Kenny Boy of the error of his ways, DUK and the NHS should be a doddle.

Posted by Lowcarb team member at 18:19