Jeremy Clarkson to be sacked by the BBC ! 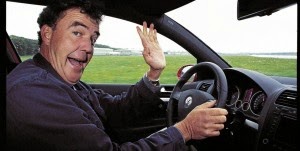 Jeremy Clarkson is to be sacked as Top Gear presenter after a BBC investigation concluded he did attack a producer on the programme.
Lord Hall, the Director General of the BBC, is expected to announce his decision on Wednesday after considering the findings of an internal investigation.
Clarkson, 54, will be thanked for his work on the hugely popular motoring show, but will be told such behaviour cannot be tolerated at the Corporation. More here.
An unnamed BBC insider said last night, we are looking for a replacement for Ckarkson. In order to maintain our stance on political correctness and minority promotion, we are looking to recruit a one legged Mongolian lesbian with a speech impediment and a glass eye.
Eddie
Posted by Lowcarb team member at 01:18