Baked beets with carrots and leeks 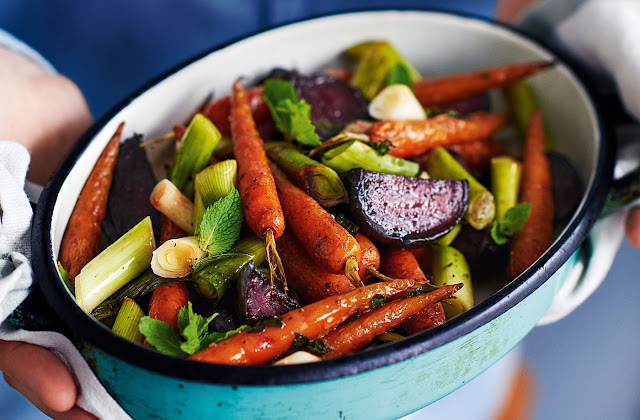 Roasting vegetables brings out the wonderful sweetness of beetroot, carrot and leeks and these colourful baked vegetables, not only look beautiful, but are the perfect accompaniment for a Sunday, or mid-week roast. Serve this dish with some fresh mint leaves to give your side dish an extra zing...

Method:
1. Preheat the oven to gas 6, 200°C, fan 180°C.
2. Put the beetroot and carrots in a baking dish. Toss with the olive oil and season well. Roast for 20 minutes, until beginning to colour.
3. Remove from the oven and add the leeks, mint sprigs and stock. Carefully cover with foil, (using oven gloves), to seal it tightly around the edge of the dish.
4. Return to the oven for a further 20 minutes, until the leeks are tender and the stock has reduced. To serve, stir through the remaining mint.

Did you know - "Mint is known to have originated in Asia and the Mediterranean region. In many cultures, mint symbolised hospitality and was offered as a sign of welcome and friendship to guests as they arrived.

In the Middle East mint tea is still served to guests on their arrival, whilst in ancient Greece, the leaves of mint were rubbed onto the dining table, which was a sign of their warm greeting.

Mint was also often used as an air freshener and was placed in the rooms of houses, synagogues and temples to clear and freshen the air and rid the smell of unpleasant odours from the room. The Greeks and the Romans used mint as a perfume and a bath scent, as well as using it in medicine and in cooking.

Mint was so revered by the ancient Greeks that they named the plant after the mythical character Minthe. According to Greek myth, Minthe or Menthe as she is also known, was a river nymph. Hades, the God of the Underworld, fell in love with Minthe and wanted to make her his lover. However, Persephone, Hades's wife found out and in a fit of rage turned Minthe into a plant, so that everyone would walk all over her and trample her. Unable to undo the spell, Hades gave Minthe a wonderful aroma so that he could smell her and be near her when people trod on her.

Mint contains a number of vitamins and minerals, which are vital to maintain a healthy body. Mint is rich in Vitamins A and C and also contains smaller amounts of Vitamin B2. Vitamin C is an important antioxidant and may help to decrease the risk of certain cancers such as colon and rectal cancer. Although mint may be consumed in small quantities, the vital nutrients obtained are still beneficial to one's health. Mint also contains a wide range of essential minerals such as manganese, copper, iron, potassium and calcium.

The two most popular types of mint that you may use for cooking are peppermint and spearmint, with spearmint being the milder of the two. Mint is extremely popular in Middle Eastern cooking, especially Iranian and Lebanese cuisine, where it is used in an extensive range of sweet and savoury dishes.

Fresh mint can be bought from your local supermarket and should be stored in the refrigerator for the best freshness. If you buy a bunch of mint, it should be placed in a container of water, stems down, with a plastic bag loosely covering the top. Ideally change the water every two days and the mint should stay fresh for up to a week."

All the best Jan
Posted by Lowcarb team member at 17:34

What an unusual but delicious looking dish.xxx

Thank you ... I always appreciate your recipes. Helps me create new ideas here for our meals.
Carla

I am not a veggie person, at all, but that looks delicious! And the hubster is drooling on my shoulder, so I suppose I will be giving it a try! Have a great week! Love and hugs Jan!!

A very delicious recipe. I am a big fan of mint!

MMm, that does look good! I really like Beetroot but I rarely eat it! Must rememdy....

This looks so good! I love mint! I grow mint and I drink mint tea everyday!

The only way I've ever eaten beetroot is pickled in sweet vinegar- and that was a bit of an adventure for me!
Lisa x