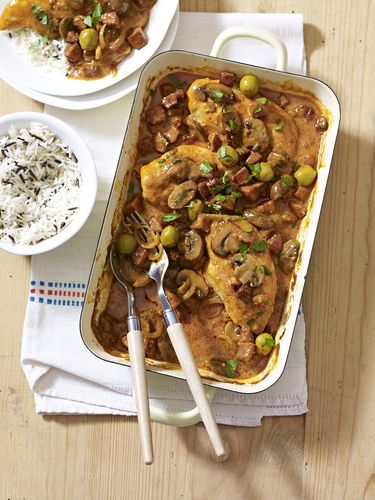 This lovely recipe idea comes from Mary Berry. She has been teaching the nation (UK) to cook for over four decades and is the author of over 70 books including 'Mary Berry Cooks The Perfect' - from where this recipe suggestion comes.

Mary is Cordon-Bleu trained and an experienced magazine cookery editor as well as a seasoned television presenter. In 2009 she was awarded the highly coveted Guild of Food Writers Lifetime Achievement Award and in 2012 she was made a CBE for her services to culinary arts. Mary lives in Buckinghamshire with her husband, Paul, and their dog, Millie, and continues to inspire thousands of people across the country to enjoy home cooking.

About this recipe suggestion, Mary says she 'likes this dish for casual entertaining - you can make it ahead and finish it in the oven before serving. If it’s been in the fridge, allow a bit longer to heat up'

Instructions
1. Heat a large, non-stick frying pan or saute pan. Add the chorizo and fry until crispy. Remove using a slotted spoon, drain on kitchen paper, and set aside. Keep 1 tablespoon of the chorizo oil in the pan and drain off any excess. Add 1 tablespoon of the olive oil. (See below, Use the chorizo oil for frying.) When hot, add the onion and garlic and fry for 6–8 minutes over a medium heat, stirring occasionally, until the onion starts to brown. Spread the onion over the bottom of the baking dish.

2. Preheat the oven to 200C (fan 180C/400F/Gas 6). Pour another tablespoon of the oil into the pan. Season the chicken and brown over a medium heat for 10 minutes, turning once. Place on top of the onion.

3. Add the final tablespoon of oil to the pan, tip in the mushrooms, and season with pepper. Fry for about 3 minutes over a medium–high heat, stirring occasionally, until starting to brown. Stir in the paprika and cornflour. Pour in the stock, stirring to de-glaze the bottom of the pan, and simmer for 1 minute. Stir in the soured cream and heat until just starting to bubble.

4. Pour the mushroom sauce over the chicken in the dish. Scatter over the chorizo and olives. Cover with foil and bake for 15–20 minutes or until bubbling around the edges. Serve sprinkled with the parsley.

Use the chorizo oil for frying

Fry the chorizo in a hot, dry pan over a medium heat for about 1 minute until the fat starts to run, then increase the heat for 2 minutes until crispy. Stir frequently so it doesn’t burn. Remove using a slotted spoon.

Use 1 tablespoon of the spicy red oil released by the chorizo for frying the onion and garlic: its smoky paprika flavour adds depth to the dish. Don’t use any more, as it can overpower; instead, top up with olive oil.

Recipe from here
I would consider serving this with some cauliflower rice, just right if you are living the LCHF lifestyle! Why not sit and enjoy this tasty dish soon ... these flowers, or something similar, will look good on the table ... an early touch of Spring! 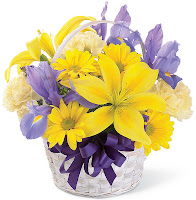 Hope you may give this recipe a try soon
All the best Jan
Posted by Lowcarb team member at 10:28

Looks delicious and I do love mushrooms.

Hello, sounds like a delicious chicken recipe. I will try it soon, thanks for sharing! The flowers are pretty. Happy Wednesday, enjoy your day!

It looks so delicious!

This is a wonderful recipe. And one of these days I'll have to try cauliflower rice. I've never had that and I'm curious about it. Maybe when the dust settle down around here and I have more time, I'll make it.

Now this sounds absolutely wonderful and something I know my family and I would enjoy. I just love the recipes you share, dear Jan. Thank you!

Enjoy the remainder of your day! Hugs!

Lovely recipe, I do like Mary Berryand is certainly something we'd enjoy xx

Well if it's Mary Berry's recipe I know it will be delicious. I do adore watching her! Thank you for the lovely recipe, Jan. Have a wonderful evening. ♥

that does sound very tasty!!

Hello Jan, I too am a great Mary Berry fan. Her recipes are so easy to follow and always taste great.
No snow as yet in our part of the country.
Stay safe and warm :)

A few ingredients which make a very tasty dish I'm sure.
Lisa x

Will definitely give this one a try. Cheers Jan and thank you :D)

Thanks so much Jan!