Beyond the Higgs Boson the low carb anti.

Scientists have announced, they may have discovered a previously unknown level of low carb anti, dietary knowledge incompetence.

"We have hypothesised for a long time, that a level of sound dietary knowledge so incredibly small, as to be almost undetectable could theoretically occur. But now it appears that we may be close to proving its existence" said leading researcher Professor Novro Claphanger.

Incompetence research enjoyed its golden age in the 1990’s when the Clueless, the Useless, and the Hopeless elements were all discovered, who together created the US food pyramid, but it was probably the discovery of the Total F**kwit, just a few years ago, which revitalised the entire field and led directly to this newest breakthrough. Scientists have dubbed this latest discovery the Bonkers Particle. 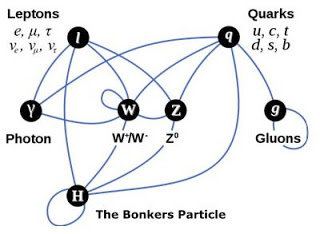 The Bonkers Particle, if confirmed, will represent a level of capability several magnitudes below even the Total F**kwit’ Explained the Prof. "It really is almost impossible to overstate just how small a level of dietary knowledge we are talking about here" will it ever be thus?

Posted by Lowcarb team member at 13:23

It would be funnier if it were not so true.

It would be so much simpler, and much easier on the nerves, if all these anti low carb people wold just TRY it for a few months. That would completely end the discussion would't it?

My uncle has cancer. I advised him to reduce drastically his sugar intake... His doctor told him "this is not the time for a diet!" ????

This is rich coming from someone who denies the laws of physics, CICO denier Eddie - do keep shooting yourself in the foot with silly blog posts like this!

Eddie, in prophetic fashion, I think you just had a bombardment of radioactive moron particles from an anonymous direction.