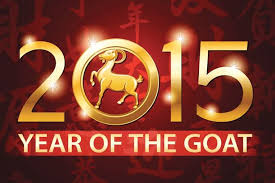 
Spring Festival, widely known as Chinese New Year in the West, is the most important traditional festival, and the most important celebration for families in China. It is an official public holiday, during which most Chinese have 8 days off work.

It is day one, month one of the Chinese lunar calendar, and its date in January or February varies from year to year (always somewhere in the period January 21 to February 20).


It is custom to have lucky decorations everywhere. Every street, building, and house is decorated with red. “Red” is the main colour for the festival, as it is believed to be an auspicious colour. Red lanterns hang in streets; red couplets are pasted on doors; banks and official buildings are decorated with red New Year pictures depicting images of prosperity. As 2015 is the year of goat, decorations related to goats will be commonly seen. There are red goat dolls for children and New Year paintings with goats on.

It is custom to eat certain foods during the 'New Year' festival because of their symbolic meanings, based on their names or appearance.

Fish is a must for Chinese New Year as the Chinese word for fish (鱼 yú /yoo/) sounds like the word for surplus (余 yú). Eating fish is believed to bring a surplus of money and good luck in the coming year.

More can be read here about Chinese New Year

All the best Jan
Posted by Lowcarb team member at 12:03

Happy Chinese New Year! And thank you for your visit to my blog :)