Katie Hopkins aka motor-mouth will run through London with a sausage up her bum!

"Katie Hopkins threatened to "run naked" through the streets of London with a "sausage" up her bottom if Sadiq Khan won the London Mayoral election and following the confirmation of his victory the out-spoken star has hinted she'll stick to her word.

Shortly after it was announced that London had elected its first Muslim Mayor, beating Conservative candidate Zac Goldsmith, the rent-a-gob appeared to confirm we'd see her in all her glory as she took to Twitter. From here. 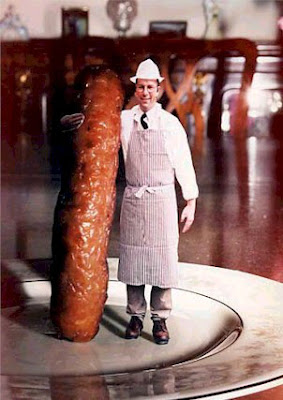 Just don't like this woman. She will do anything for her name to be everywhere.
Have to confess I did laugh at your post.

A case of 'be careful how you run your mouth', it seems.
Happy new week!

lot's of peeps are running their mouths in a similar way, that if trump wins....they will move out of the US. i say, be careful what you say!!!

happy mothers day, i hope you are having a wonderful weekend!!!!!!!!

Our thanks (obrigado pelo seu comentário) to Anon at 15.18, Ben, Blogoratti, Debbie, and Francisco for commenting on this post.

Francisco comment translated is "A hug and good week"


All the best Jan and the low carb team