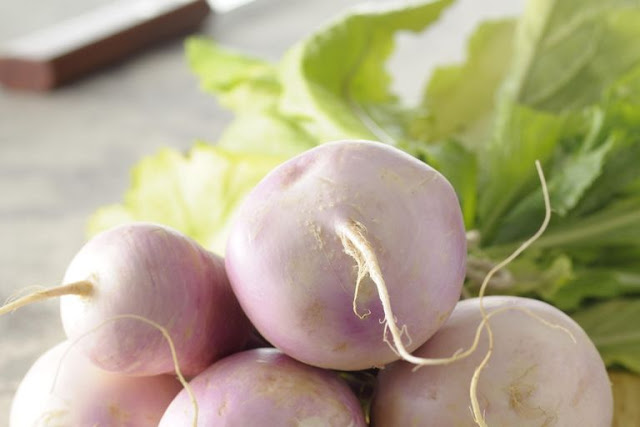 Turnips are root vegetables that have less than a quarter of the carbohydrate of potatoes, and so are great choices for people who follow a low-carb diet. Turnips are members of the same plant family as cabbages, kale, broccoli, and cauliflower (cruciferous vegetables). The strength of the flavor varies, but becomes milder with cooking. Turnip greens are also nutritious and another option when you're looking for a leafy vegetable.

Do you find cruciferous vegetables to be bitter? You probably have a genetic variant that allows you to taste a certain chemical (phenylthiocarbamide) which tastes bitter.

Health Benefits of Turnips:
Turnips are an excellent source of vitamin C, a very good source of fiber, and a good source of potassium, manganese, calcium, and vitamin B6. Turnips are also cruciferous vegetables (also called brassicas or cole crops).

Cruciferous vegetables are high in glucosinolates, which are phytonutrients thought to be helpful in protecting our bodies from certain types of cancers. Glucosinates also have antimicrobial and anti-inflammatory properties.

Above details from here

The turnip or white turnip, is a root vegetable commonly grown in temperate climates worldwide for its white bulbous taproot.

In the north of England and Scotland, and eastern Canada (Newfoundland), turnip (or neep; the word turnip is an old compound of tur- as in turned/rounded on a lathe and neep, derived from Latin napus) refers to the larger, yellow rutabaga root vegetable, also known as the "swede" (from "Swedish turnip")

There is evidence that the turnip was domesticated before the 15th century BC; it was grown in India at this time for its oil-bearing seeds

These details from here 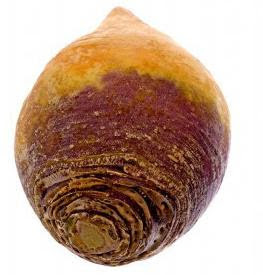 Above details from here

Why not put these vegetables on your shopping list soon!

I was put off swede for a number of years after having it for school dinners. I don't know what they did in those kitchens but the food wasn't at all appetising. I'm glad I tried it again though as it's a great vegetable, one we all enjoy.

I really like turnips but peeling them is a pain. Thanks again guys for the recipes. Wishing you an amazing day out there.

Turnips are wonderful--I love both the root and the leaves. They can be grated and stir fried or cubed and added with other root vegetables like carrots and potatoes and placed in a bag with herbs and olive oil and then baked.

Hi Jo
I'm so glad you, and the family, like swede now.
We all love it in our family too ... especially mashed swede with plenty of butter.
Quite Yum!

Hope your week is going well

Hi Nikki (Sarah)
I think both turnips and swede are not always easy to peel and care should be taken ... but once they are peeled and cooked they are so worth it!

Many thanks for your comments and good wishes

Hi Sage
So great to see you say you love both the root and the leaves!
Many thanks for your hints and tips ...

These have always been my favorite vegetables.

Hi,
My mom loves rutabaga.
I have never tasted a turnip. I must try one this season. :-)
Carla

Hi Denise
Many thanks for your comments both here and on other posts too.

Yes, these vegetables are great aren't they, and can be used with many recipe plans.

Hi Carla
"My mom loves rutabaga" ... she knows a good vegetable when she's eating it!
There are some lovely vegetables available that offer a lower carb alternative, hope you get to try turnip soon.

Thanks so much for your comment and continued support of the low carb diabetic blog.

As you know, I'm not a fan of low-carb living for myself, but I do enjoy these veggies just the same. So much yum. So little time.