Not every day you meet a Star Wars Storm Trooper! 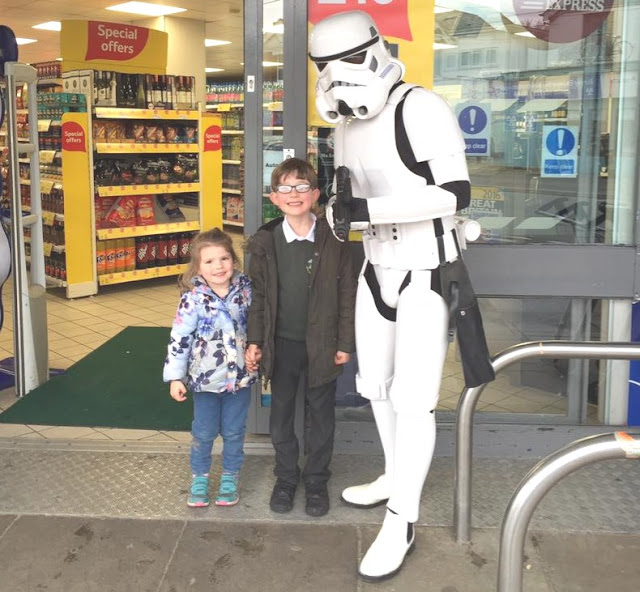 Well coming home from school you just do not expect to see a Storm Trooper do you! Not unless there is a Star Wars film and the DVD of it has just been released in the UK!

This is what the grandchildren saw Monday and stood happily to pose, much to the jealously of some of their friends!

It's hard to believe that, "thirty years after the defeat of the Galactic Empire, the galaxy faces a new threat from the evil Kylo Ren (Adam Driver) and the First Order. When a defector named Finn crash-lands on a desert planet, he meets Rey (Daisy Ridley), a tough scavenger whose droid contains a top-secret map. Together, the young duo joins forces with Han Solo (Harrison Ford) to make sure the Resistance receives the intelligence concerning the whereabouts of Luke Skywalker (Mark Hamill), the last of the Jedi Knights...
More about Star Wars here

Well after all the excitement it was home to a great tea ...fish, broccoli, carrots, peas and charlotte potatoes. Yum!

All the best Jan
Posted by Lowcarb team member at 19:44

Isn't he a little short to be a Stormtrooper?

What a cute shot! A fun treat for the kids. They look so happy.

How cool to meet and pose with a Stormtrooper. Cute photo. Have a great day!

how fun, your grands are adorable!!!!

For your lovely comments.
Such fun to have this photo.

Hope you've all had a great week, it's certainly gone quickly.
Friday tomorrow!!!

Those smiles say it all, what a great surprise.
Lisa x