Pan-fried trout with a cucumber, apple and dill salad 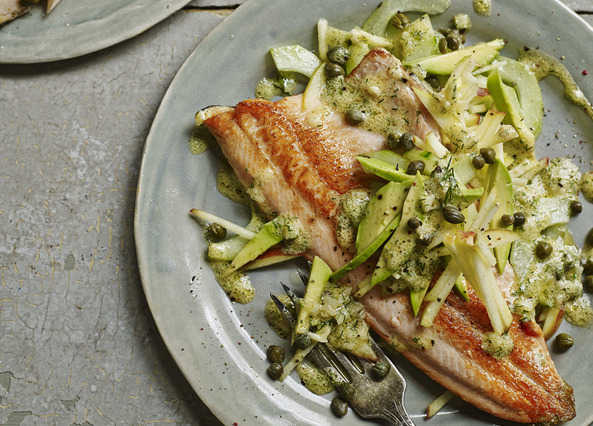 I do like to include fish in my menu plans. I also like cucumber, avocado, apple and dill, so when I saw the words 'fresh food designed for real life' I thought yes, I like the sound of that! Madeleine Shaw uses these words and she also likes to show how healthy food can be delicious, nutritious, and affordable but simple to make.

Take this recipe for example, the sweetness of the apple really goes well with this strong-flavoured fish, but if you can’t find trout fillets you could use salmon instead. The capers just add an extra burst of flavour ...


Method:
1. Place the cucumber slices in a colander, sprinkle with salt and let them sit for 10-15 minutes to draw out the excess water while you prepare the rest of the dish.
2. Make the dressing by mixing the mustard, dill, vinegar and olive oil together with a pinch of salt. Thinly slice the avocado and apple and throw into the dressing with the shallot, stirring well to combine.
3. Heat the oil or butter in a frying pan on a medium heat. Throw in the capers and stir for 30 seconds, then move them to the edges of the pan and throw in the trout, skin side down. Sprinkle over a little salt and cook for 5 minutes until the skin is crisp, then flip the fish over and cook for another few minutes or so until almost cooked through. The cooking time will depend on the thickness of the fillet, but look for golden skin, a bronzed top and flesh that is opaque all the way through.
4. Rinse the cucumber. Drain and pat dry with some kitchen paper, then mix in with the salad. Divide the salad among two plates and serve with the fish and a sprinkle of capers. 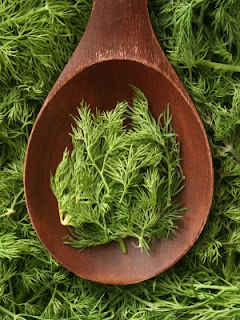 Fresh Dill:
Dill is an important culinary herb that is used for its seeds and leaves It originally grew wild in Southern Europe thru Western Asia.

It was extensively used by the ancient Greeks and Romans. Remnants of the herb were found in Swiss Neolithic settlements dating back to 400BC. By medieval times its use spread to central Europe. Dill is a popular culinary herb used in Greece, Scandinavia, Germany, Central Europe, Russia, the Balkans and Romania. References to the fresh herb can be found in the writings of Roman naturalists, English clergy and German literary works in the 11th century.

All parts of the herb can be used for culinary purposes. Dill is not a common herb in Mediterranean cooking. It is known as a spice used in pickled cucumbers. In the United States they are known as dill pickles. The herb is key for the production of dill vinegar (a key cooking ingredient in some recipes). You will find it used/employed in many sour dishes, especially sauerkraut. You will find dill used in lemon sauces for fish, yogurt, sour cream, salad dressings, spinach dishes, chicken and lamb casseroles. Because of its delicate nature most chefs add the fresh herb to their hot recipes just prior to removing from the heat source.

I think this is a lovely recipe and the use of dill just compliments it. Indeed some may say it's great food, and they wouldn't be wrong. I wonder would you also serve this dish with a glass of chilled white wine, or perhaps a S.Pellegrino?

All the best Jan
Posted by Lowcarb team member at 11:31

I don't think I've ever tried trout, I'm not very adventurous at all where fish is concerned sticking to the same things. The salad sounds lovely.

This looks delicious. Such a good mix of flavour, my mouth is watering just looking at the picture.

I so wish I wasn't such a picky eater, your stuff always looks good but I am not a lover of anything fishy, when we started on our new eating plan that was one of the meals to eat Halibut and my hubby did it on the grill and he was so proud of me for eating it but that was the last time I have had it, I know I would be in much better health if I would

Hello, I love fish of any kind. This meal and the salad look delicious. Happy Friday, enjoy your weekend!

That looks and sounds OK. Sorry to be in the "fly in the ointment" again but I find avocado a little tasteless and having tried it on several occasions just can't aapreciate it as others do. Any fish is fine by me though.

Have a good weekend Jan

Dill, yum. Grew up on the fresh stuff. Heaven.

you had me with cucumber and dill. :)

Many thanks to you all for taking the time to comment:

Jo - I do alternate between trout and salmon, quite often the fish-monger may have a special offer, so I buy the cheapest! I agree this salad is a lovely mix

Jenny - it does look mouth-wateringly good, why not try the recipe soon

Connie - not everyone can eat fish, we have a nephew who is allergic to it. However, if you can eat fish then I do think it nice to include it with your menu plans - why not consider giving it a try again soon!

Eileen - it is a lovely recipe idea, glad you liked the look of it

Phil - looking back I never used to like eating avocado 'on it's own' so to speak and would always have it with prawns or a vinaigrette. However in more recent years avocados have become a firm favourite in our household. However, with any of the recipes I highlight a little tweak here and there could be all that is needed - perhaps consider this recipe idea but increase the amount of apple and cucumber instead of the avocado. I do agree with you fish can make a great dish. Thanks for your good wishes - I wish you a good weekend too.

Karen - yes, it is great if you can incorporate fresh herbs into your dishes. Glad you liked this recipe suggestion

Ivy - Dill is a good herb to use, as are many others ... we can be quite spoilt for choice


Thanks once again for all your comments
Wishing you all a great weekend ahead ... hope the sun may shine wherever you may be

Dill! I love it. I grew up with that. My mom always had fresh dill for cooking. Smells so good. And it's funny how our tastes change over time. When I was young, I didn't like fish, and now that I'm older, it's one of my favourite things! I hope your Friday was a beautiful one! Have a lovely weekend.

Hi Martha - yes our tastes do change over the years ... some foods stick with us whilst others fall out of flavour and new ones take their place. I think the mix of the ingredients used in this recipe with the dill just works so well.

Part of my Friday was spent out in the rain! I'm hoping the weather may be a little better over the weekend - we shall see!

Good wishes to you for a happy weekend

We love dill! I grow a large patch in our garden. I add it to many recipes. I enjoy it in egg salad.
I am pinning your post. Thank You!
Carla
I will be away next week, catch up with you soon.

I'm not much of a fish person, Jan, but this looks delicious. I like the dill goodies on top of it, Yummy. :) I really should eat more fish.

Mmmmm, that really looks nice. We live trout so should try it. I really like dill bit hardly ever eat it!x

Hello Carla - a large patch of dill growing in your garden, sounds great to me. You can certainly hand pick it, and enjoy it in any of your favourite recipes ...

Thanks for your comment and have a great week away

Hi Sheri - yes, of course if fish is not to your liking just choose another recipe to include some lovely dill ...

Many thanks for your comment, have a lovely weekend

Hello Kezzie - if you have fresh trout nearby perhaps get some soon, you can then enjoy this lovely dish.

Have a great weekend and thanks for your comment.

I LOVE dill and grow it in my garden. Cucumbers and dill just go together so well, this recipes looks and sounds amazing!!

Hi Debbie - fresh dill is great, and yes it goes so well with cucumber (and a lot of other things too)