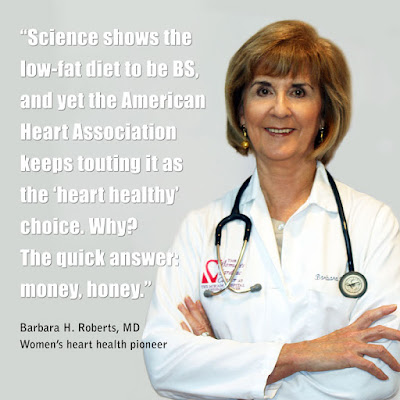 If ever there was a Nutrition/Medicine Hall of Fame, Barbara H. Roberts, MD, would certainly deserve her place there. In 1977, she became the first female cardiologist in the state of Rhode Island. "I was determined to be a doctor," she explains, "I wanted to be something that was very far from the norm for women in those days and being a doctor was about as far as you could get."
Today, Dr. Roberts continues to push boundaries by challenging deeply entrenched nutritional dogma. Besides being a consistent, authoritative voice on the dangers of statins, she also has plenty to say about diet and the glaring inconsistencies between published scientific research and the dietary recommendations of the US government and the American Heart Association (AHA).
In a recent article for The Daily Beast, Dr. Roberts writes, "Science shows the low-fat diet to be BS, and yet the American Heart Association keeps touting it as the ‘heart healthy’ choice. Why? The quick answer: money, honey."
She goes on to scrutinize the AHA's "Heart Check Program," a marketing scheme that enables food industry partners to market their products as "Heart Healthy" under the AHA's guidance. Currently, 889 products bear the Heart Check Program's stamp-of-approval. Companies pay between $1,000 and $7,500 to have their products certified.
Many approved products contain obscene amounts of sugar, but still get the nod because the AHA stacks the deck against fat and in favor of sugar when it comes to assessing heart disease risk. Dr. Roberts explains that the AHA only considers increased LDL cholesterol and high blood pressure as risk factors for heart disease. Accordingly, they demonize saturated fat and salt while giving sugar and other carb-heavy foods a pass.
"There are many other recognized risk factors the AHA ignored," Roberts explains, "including blood sugar level, low “good” (HDL) cholesterol, insulin levels, and body weight—all of these are influenced by diet." Most people who have heart attacks don't have increased LDL cholesterol. They're far more likely to have metabolic syndrome, which is defined as having three of the following: high triglycerides (blood fats), high blood sugar, high blood pressure, low “good” cholesterol (HDL-C), and a large abdomen measurement (abdominal obesity).
From a dietary perspective, low-carb, high-fat (LCHF) diets protect against metabolic syndrome much better than do high-carb, low-fat (HCLF) diets, which the AHA recommends. This is because sugar and other carbs, when consumed excessively, promote increased triglycerides and abdominal obesity while decreasing HDL cholesterol. Meanwhile, LCHF diets improve all the above-mentioned conditions associated with metabolic syndrome.
It comes down to one very simple concept. Selling processed foods containing large amounts of sugar as well as cheap unsaturated vegetable oils (which also promote heart disease) is far more profitable than selling foods containing healthy sources of saturated fat and decreased sugar.
Since 2000, Dr. Roberts has been the director of the Women's Cardiac Center at the Miriam Hospital and an Associate Clinical Professor of Medicine for the Brown University Program in Medicine. In 2003, the Rhode Island Heart Association, an affiliate of the AHA, named her Physician of the Year.
Despite her accolades and her storied career, she hasn't yet been able to sway the AHA away from its seedy corporate alliances. "There is much that women can and should do to lower their risk of heart disease and live longer, healthier lives," Dr. Roberts notes, "Worldwide over eight million women die each year from heart disease or stroke, almost eighteen times the number who die of breast cancer." While I don't expect much from the AHA, they would be wise to heed Dr. Robert's advice.
Taken from the excellent low carb paleo site of Christopher James Clark which can be found here.

Posted by Lowcarb team member at 17:55