Celery some interesting facts : Have you tried it braised 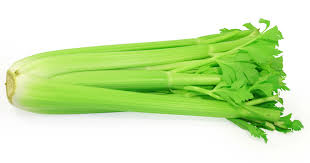 Celery has been used for thousands of years, although at first more for medicinal purposes than for cooking.


The Middle Ages:
Early types of celery were very bitter and it was mostly regarded as a medicinal plant from classical times through to the Middle Ages, when it was used to treat anxiety, insomnia, rheumatism, gout, toothache and arthritis. Around the 15th century, when it was known as ‘smallage’, a sweeter, more tender variety was developed and it began to be enjoyed as a vegetable in its own right.

19th – 20th century:
In the 19th century farmers in the East Anglian Fens began to harvest celery around September, which they prolonged into the colder months (to get a better price) by covering it with soil – ‘earthing up’ - to protect it from frost. Celery's popularity grew during Victorian times and it became a traditional salad vegetable to accompany the cheese board served at the end of meals over the Christmas period. However the season for Fenland winter celery was by its nature short and unpredictable, and people wanted more of it - for longer.

Modern Celery:
About 50 years ago varieties were introduced that could be blanched without being earthed up, by planting the rows close together. They were also resistant to bolting to seed, so could be planted earlier. This paler ‘white’ celery was then available from July but the taste and shelf life of the old varieties had largely been lost. Its reputation was further damaged by poor tasting celery imported in the winter season.

Celery Today:
Fashions change in food as in everything else and over the years, green celery became more popular than the traditional white variety. In the last 25 or so years new varieties and growing techniques have been developed to achieve the desired 'salad eating' taste and appearance, selecting varieties with the best flavour and growing characteristics. The greener varieties related to the old Fenland varieties won through this selection process hands down and by happy coincidence also had better keeping qualities. So green celery, now available all year round, is a direct descendant of the traditional celery.

The above words/details taken from here

Celery has long been regarded as an ideal food for those trying to manage their weight due to its low calorie status and high water content, however it's a good source of potassium and high in calcium too – which is important for healthy bones, blood pressure and nerve function.

What’s more, choosing to snack on celery also guarantees a fabulous amount of antioxidants – it’s packed with Vitamin C, Potassium and Iron, and provides a good dose of folate too. And don't forget the leaves either, and the darker the better, as they contain carotene and more minerals and Vitamin C than the paler leaves. To top it all off, celery is low sodium and cholesterol free as well as being virtually fat free too, but if you need any more reasons to eat celery, simply read on…

It’s one of the lowest calorie foods you can eat:
Celery is extremely low in calories - 1 stalk contains just 2 calories – and is virtually fat free, making it a great snack or ingredient for slimmers.

Helps you feel fuller for longer:
Celery’s high water and fibre content and crunchy texture are not only brilliant for helping you feel satisfied, but also for getting you to chew your food well and ensuring you stay fuller for longer.

Reduces blood pressure:
Celery is a good source of potassium which helps to control blood pressure and counteract the negative effects of too much salt on the diet. It also contains ‘3-n-butyl phthalide’ which helps to reduce blood pressure by relaxing blood vessels and incidentally is one of the components that gives celery its characteristic smell and taste.

Helps slow progression of dementia:
Recent research indicates that the plant compound luteolin - found in celery - may help combat Alzheimer's and other degenerative mental illnesses. This is because luteolin reduces age-related inflammation in the brain and related memory deficits by directly inhibiting the release of inflammatory molecules in the brain. Research is still in the early stages, but it is known that a healthy balanced diet, rich in fruit and vegetables, can help reduce the risk of dementia.

Can help protect against cancer:
One of active compounds in celery is the phytochemical coumarin, which has been proven effective in cancer prevention and capable of enhancing the activity of certain white blood cells that help fight cancer. They also help prevent free radicals from damaging cells. In addition, the plant compound luteolin which is found in celery has been shown to function as an anti-oxidant, anti-inflammatory, and anti-cancer agent.

Aids a good night’s sleep:
Blended celery juice is thought to help a good night’s sleep because of the vitamins, mineral salts and nutrients it contains. For a refreshing Grape & Celery Cooler, juice a bunch of white dessert grapes with two stalks of celery and top with fresh mint leaves.

The above words/details, with additional links taken from here 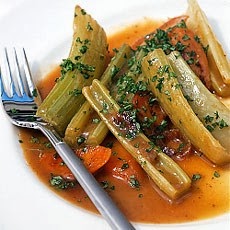 Celery has such a lot going for it as a raw ingredient in salads.
Perhaps, because of that we rather forget how good it is cooked and served as a vegetable.
This method is delightfully quick and easy, and tastes just wonderful.
Why not have a look at Delia's recipe's here


All the best Jan
Posted by Lowcarb team member at 18:18

I do use celery as a side dish as well as, make celery broth.

I do like celery and eat if often. Didn't know all those facts about it.
My celery is growing nicely outside. Remember I started it inside in water like you told us about.

I like it cooked. I've even thrown a few pieces on the grill when I had extra space around my steak.

And another salad, so alive Jan.

Amazing facts about celery! A little superfood.
I must admit I do prefer to eat it cooked.
Have a lovely weekend :)