Do You Ever Ask - Male And Female Peppers - Fact Or Fiction?

Do bell peppers have a gender? Some say they do. The idea has been around for a while but only recently has it caught traction. According to the theory, there are distinct male and female peppers and the gender indicates whether a bell pepper has more seeds or whether it is better for cooking or eating raw. Interesting theory, but is it fact or fiction?

Is the male and female peppers claim fact or fiction?

Total fiction. There’s no such thing as bell pepper sexes. But let’s break the urban legend down to make things clear.

The lobe fallicy – What does the number of lobes actually indicate in a bell pepper?

Absolutely nothing in terms of sex. Bell peppers can have anywhere between two and five lobes, not just the three or four listed in this urban legend.

They may, but only because they have more lobes, meaning more cavity space in which seeds can be grown. But even this is not 100% true all the time. Peppers can have a single chamber or multiple chambers containing the white pithy tissue with the seeds. Exactly how many chambers does not always indicate the number of seeds of the bell pepper, but more lobes is a better guess if you are hunting for bell pepper seeds.

Are these “female peppers” sweeter?

Sweetness has nothing to do with the amount of lobes on your pepper. It has everything to do with your cultivated variety, the soil you’ve grown your peppers in, the weather, and, especially, how long you’ve left the fruits on the vine. Bell peppers that have aged form green to their mature red will be sweeter, no matter if they have three lobes or four.

So is there anything interesting about gender in relation to bell peppers?

There is: the pepper plant creates “perfect flowers” also called hermaphroditic or unisex flowers. All plants of the nightshade family folllow suit (tomatoes, eggplants, sweet peppers, chili peppers, etc); their flowers contain both stamens and carpels – they have reproductive systems that are both male and female.

So the real truth here is that not only are bell peppers genderless, the flowers of the bell pepper plant themselves are – in a simplistic way – all genders. This is a pepper that breaks down all barriers."

I wonder do you have a favourite bell pepper, the low carb team are fond of the cheery red pepper 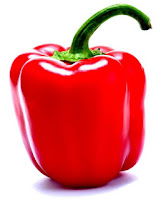 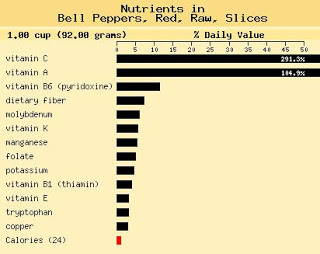 I've never thought about sex of bell peppers. This new idea might bring us a new field of better cooking.

Interesting--I never think of the sex of a plant at all, though I know that for some plants it's better to have one or the other--or one of each for better pollination. I prefer the red pepper myself; I think it has a sweeter taste and adds some color to different dishes. Have a good week, Jan!

I knew trees and some bushes can be either sex but never peppers. I think it depends on the nutrients, water, and all over condition in which they grow.

Have a very blessed week. Thanks for visiting. Grateful for your kind comments.

I'm pleased that you have sorted out fact from fiction in relation to peppers. Of course the feministas won't be happy with your explanation and will need to prove that there are two sexes and an obvious superior one.

Have fun in the week ahead and eat wisely as you always do.

I like the red ones best. I think they taste sweeter. I like to eat them raw and roasted on pizza. : )

I've heard of the gender thing for peppers before

Gender for peppers whatever next. I will just stick to eating them. Ted

I don't know if I have a favorite, the ones I am growing in my garden right now are going bad if I leave them on to long so I am picking them while green, not giving them a chance to turn. I had never heard of this gender thing, that is too funny, ours generally have 4 :)

Yes, there are so many different types of bell peppers, but I think my favorite kind are the classic green ones. Sometimes I make scrambled eggs with bell peppers. My dad used to grow them in his garden. Thanks for asking, Jan.