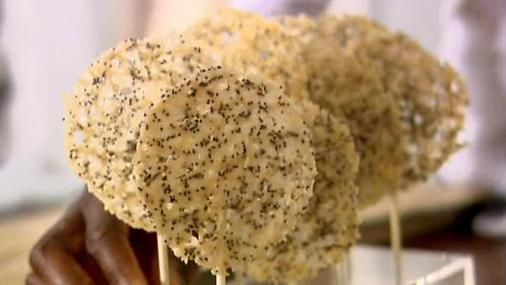 Equipment and preparation:
You will need 10 white round lollipop sticks, a round 9cm/3½in chefs’ ring or cookie cutter and two baking trays.

Method:
1. Preheat the oven to 220C/425F/Gas 7, line two large baking trays with baking paper and grease them with butter.
2. Toss the cheese and seeds together in a small bowl. Sit a 9cm/3½in chefs’ ring or cookie cutter on one of the baking trays and sprinkle a small handful of the cheese mixture into it, in a thin layer. Carefully lift the ring off to reveal a neat-edged disc of Parmesan and lay a lollipop stick on top, with the tip of the stick touching the middle of the disc.
3. Repeat with the remaining cheese and sticks to make 10 in total (leaving about 3cm/1¼in spaces between them to allow for any spreading during cooking).
4. You should have a little Parmesan left over, so use it to cover up the part of the lollipop stick resting on the disc.
5. Bake in the oven for five minutes, swapping the lollipops to a different shelf halfway through. The cheese should be lightly golden-brown and bubbling.
6. Remove from the oven and slide the paper off the baking trays and onto a rack to help speed up cooling. Leave to cool for 1–2 minutes, or until the lollipops have become crisp. Very carefully remove each one with a palette knife. I like to serve these stuck upright into a box with holes in the top."

Go - on why not give these lollipops a try ... they're certainly different!

All the best Jan
Posted by Lowcarb team member at 10:10

Such a different, and fun, idea. I should think they'd be a great talking point too.

So different.
Will have to try these.

Such a great idea for summer dinner parties!

I have to try this recipe, it looks wonderful. I have been wanting to do some Parmesan Crisps for quite a while now and this is sort of like that but even better. I'll practice and then make them for my next dinner party. Thanks Jan :)

Oh wow, Jan. These sound absolutely amazing. What a great treat and they sound not too difficult!!!!

That sure is different. I'll have to give them a try. Just hope I don't get the poppy seeds stuck in my teeth. : )

Who knew there were such things. Fascinating!xxx

I bet they are very moreish.
Lisa x