DCUK The Bonkers one has mission accomplished, another thread locked.

Over at the forum of flog, Sid Bonkers gets another thread locked. Over the years Sid and his low carb anti cohorts must have been involved in over 90% of the locked threads. Every time the antis have made complete fools of themselves (which is often) they revert to their standard MO and get a thread locked and very often a low carber banned. Long time low carb anti Phoenix, a staunch fan of Hope Warshaw "60% carb is not a high carb diet and low carb is old dogma" and Carbsane the most rabid low carb anti on the planet, was as often the case also involved. Getting threads locked is easier these days because all the mods are biased against low carbing and very cosy with the usual suspects.

Of all the antis over the years (there has not been many but have caused much damage) Phoenix has proved to be the brightest and by definition the most destructive in my opinion. We have in the past credited her with far more grey matter than the likes of Noblehead, Anna and the Cherub et al. Clearly Phoenix has lost the plot big time, as can be seen from the screen shot from the flog last night.

"II wouldn't have answered this thread because I feel uncomfortable doing so . Sid gave his reasons why people won't reply and surprise surprise his post is repeated with derision elsewhere , in a place that other members of the forum post so presumably support?"

So why did you answer on the thread Phoenix? because you could not keep away, and as alawys rather slippery of you to mention members of another forum who post at the flog. Trying to get a few more low carbers banned? just because some of the flog members post on the Low Carb Forum, does not mean they agree with every thread or subject that is discussed, or they are fans of me or Graham. Jan has never ever posted a comment re. the forum of flog or any of it's members, anywhere. But phoenix had to have a backhanded dig at Jan's thread re. our Grandchild last night with her "I haven't been able to afford to see my grandchildren since Christmas" as if we are responsible for her lack of money.

"I've been called a pharma shill (my bank account would love it, I haven't been able to afford to see my grandchildren since Christmas) an 'anti' whatever that means and goodness knows what else and I'm rather tired of it (a plague on all your houses)which is why I didn't reply to the rather loaded question."

"A plague on all your houses" Good grief has she resorted to witchcraft? she's tried everything else to silence low carbers. Bring on the Voodoo dolls and medicine men.

"so I will with a link to a previous post of mine http://www.diabetes.co.uk/forum/threads/why-i-dont-low-carb.8913/#post-83982 I could probably add to that because it's several years and an awful lot of reading and several courses later but Tim has already included a recent literature search on ketogenic diets (@Dillinger; if you read it you'll find that there are some that list the foods used)I would also add that I still take about the same amount of insulin as then; it went up when I developed hypothyroid but is now much the same as then. I agree with DD earlier who mentions that a salad can contain 19 or more grams of carbohydrate. (unless you stick to Bernstein one cherry tomato amounts) I count carbs from every source, I don't eat packaged or highly refined foods. yet they add up. So often the impression is given that higher carb diets are full of highly refined junk foods."

The link Phoenix referred to was six years old as another member stated "Your original post was 6 years ago. 'Science' changes over time. The myths about saturated fats are being debunked which is why LCHF is becoming even more popular." The 19 grams plus salad information, or a Bernstein one cherry tomato remark, also misleading. You can eat a lot of salad items (carefully chosen) and not get near 19 grams of carb.

The bottom line re. this latest thread locking exercise, even the mentally challenged and duplicitous Noblehead realised the antis were losing big time, as they always do, and went for the panic button. It was ever thus. 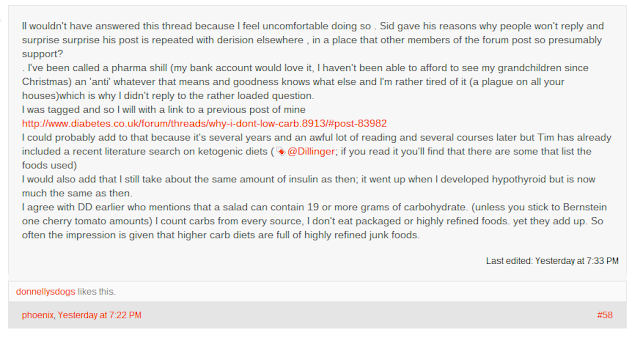 Posted by Lowcarb team member at 11:48

I'm here to wish you a happy summer Jan, I'm taking a little break.See you at the end of the season,
Sunny days ahead...
Olympia

@ Olympia - thanks for your good wishes. I have also left mine on your, 'What would summer be ...' blog post.
Take Care