Meanwhile over at the flog the Bonkers one has dragged himself out of his drug addled scratcher.

"There are so many threads like this one but it seems that lchf diets only work in the short term, generally around 6 months, there was even some study that reported as much that was posted here some time ago."

Sid reminds me of a guy called Hiroo Onada a Japanese soldier who refused to surrender after the Second World War ended and spent 29 years hiding in the jungle while continuing a guerilla war. Hiroo Onoda remained on an island in the Philippines until 1974 because he did not believe the war was over. He became the last Japanese soldier to surrender – but only after his former commander, who in 1945 had told him to stay behind and spy on American troops, was flown from Japan to order him to give up. Perhaps Sid is waiting for the nod from his old commander, the dreaded Cugila.

So confused has Sid become over the years he can't see the wood for the trees. One mention of low carb and fat and weight and he roars off like a clockwork puppet on speed. I and many others never ever had an issue with weight. Sure I was carrying some excess blubber for years, but no way did I give a monkeys. The reason I and so many like me went low carb was to control blood glucose numbers, and by golly did it work and has kept on working for over seven years. Not just for me but millions of others all over the world. Not only worked but for most type two's the reliance on medication runs from minimal to nil. That is a fact. 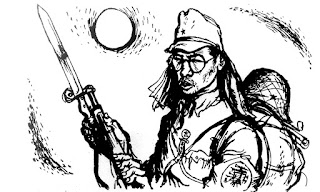 The war is over Sid, your lot lost.

I knew you would be the first to comment. Still hanging on my every word. Please can you send in some more of your demented rants, keep adding to our page count.

PS. Give my best to Sid and his miscreant mates.