Feeling Stressed ... A Cup Of Tea Could Be The Answer 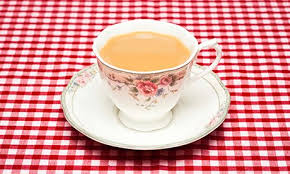 "Feeling stressed? A cup of tea might help, says science. According to scientists, caffeine has a ‘soothing effect’ and protects against the effects of stress. Put the kettle on, tea is better than coffee and don’t try arguing with us. And it doesn’t need a global empire to prove its worth.

In a time of crisis, nothing makes the world feel that little bit better than a nice hot cuppa – and now science agrees with us.

That’s right: researchers have found that caffeine (in moderation) can protect against the effects of stress.

The report, which was published in the journal 'Proceedings of the National Academy of Sciences', found that mice who were placed in stressful situations (you know, such as when the big cheese is chasing you for a report that was due yesterday) quickly became anxious and lost their appetite.

However, when caffeine was added to their drinking water before putting them under pressure, it stopped most of the symptoms.

Now, we’re not suggesting that you knock back an entire pot of builder’s tea before you get into work, but British experts said in the study that an extra cup ‘won’t hurt'.

There's only one thing to do, time to put the kettle on".

Above words taken from article here

Other related tea articles are also here and here

... Now, not everyone likes reading reports which state 'found that mice' ... but I wonder how many readers when placed in a stressful or upsetting situation have turned to a cup of tea for assistance? Is it a 'British' thing to do - do our American and other worldwide friends and readers turn instead to coffee, or something different?

Stress of any sort is not a pleasant experience, so if we can take time out from it, (not always possible) do you find it helps?

All the best Jan
Posted by Lowcarb team member at 14:29

i like hot green tea in the evenings in winter, but i have a hard time with tea in the hot summer time (and i'm not one to drink iced tea very often.)

Hi TexWisGirl, and thanks for your comment.
I'm not keen on iced tea - I quite like a lemon tea in the summer, it can be quite refreshing, and makes a pleasant change. But at the end of a busy or stressful day you can't beat a nice cuppa and a sit down in a comfy chair .....

Have a good weekend