Highly Intelligent and honest dietitians not wanted by the Dietitians Association of Australia.

I was expelled from the Dietitians Association of Australia (DAA) in April 2015 because of my recommendation of lower carbohydrate diets to people with insulin resistance and type 2 diabetes. The original complaint against me came from a dietitian who didn’t agree with my approach. Her complaint was “that my recommendation of a very low carbohydrate diet for type 2 diabetes management is inconsistent with Evidence Based Practice” and secondly, that a client she had seen previously was not happy with our interview.

Meanwhile in the UK it's Dietitians week and twitter is being bombarded with tweets from dietitians from the BDA imploring us to "Trust A Dietitian" It must be tough gig at the moment being a BDA dietitian. The mainstay of their advice for years of reduce saturated fats, lower your salt intake and base meals on starchy carbs, has been completely turned on it's head by the largest nutritional organisation in the world, the Academy of Nutrition and Dietetics.

I don't know about you, but when people keep telling me to trust them, I usually start wondering should I be trusting them. As I say it's a tough gig being a BDA dietitian, so many obviously do not trust them, and with their failure rate, in the nations obesity and type two diabetes epidemics, who can blame them.

Meanwhile, it's not all doom and gloom at the BDA as this tweet made today shows, they still have their high carb, high sugar cakes. 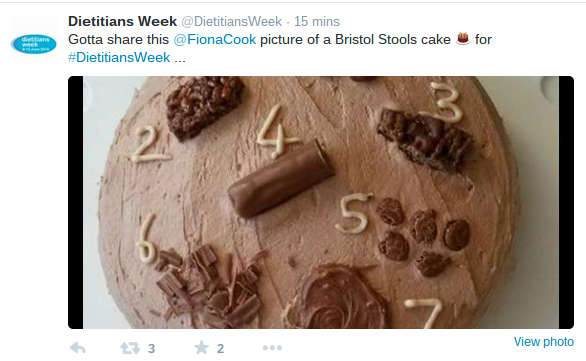 Posted by Lowcarb team member at 12:44

yeah, right -- nothing more enticing than a cake with chocolate poop on top!!! ...what are those people using for brains???

So many BDA dietitians talk complete shit, now they want to eat it. They have a name for people like that. When I was young I used to say I will try just about anything once, but I drew the line at the lark. Seriously though, it's the sort of stunt that would amuse my six year old grandson.