What Happens One Hour After Drinking A Can Of Coke ? 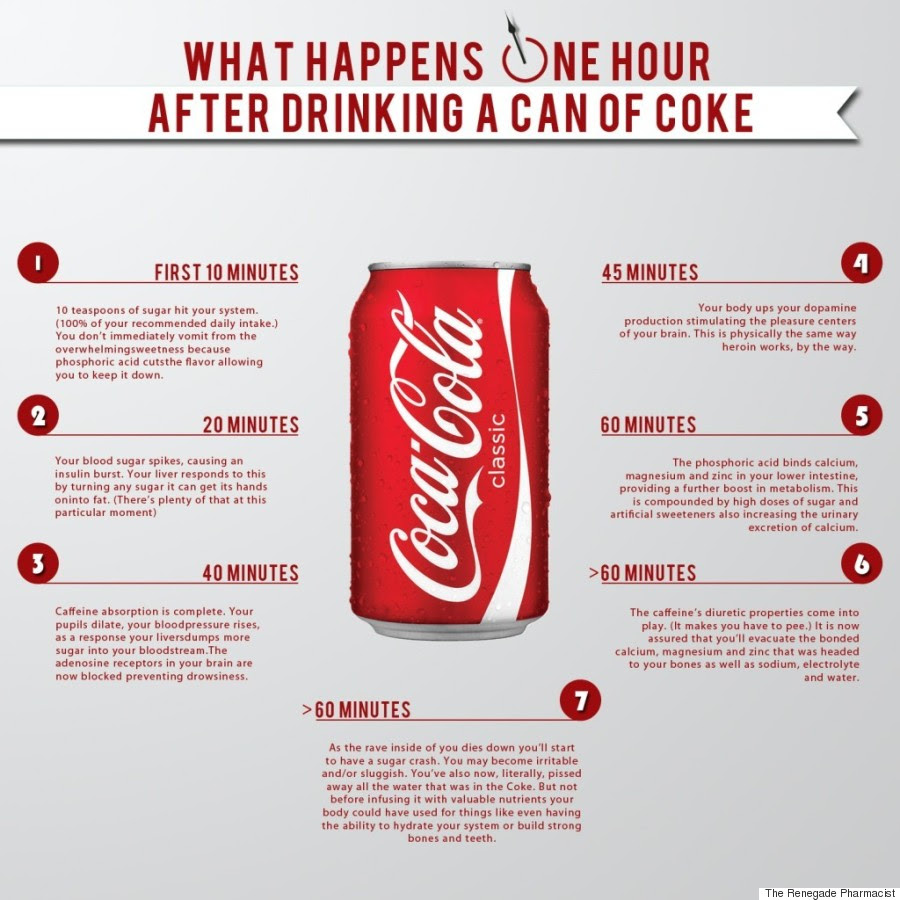 We all know Coca Cola is laden with sugar and that, at a push, you could use it to clean your toilet (but would you)! But it's a bit of a mystery as to what it does to your body.

Now, thanks to Niraj Naik, we have the answer to that question.

The brains behind website The Renegade Pharmacist has revealed exactly what a refreshing can of Coke does to your system within the first hour of drinking it. And it's not pretty.

10 teaspoons of sugar hit your system. (100% of your recommended daily intake.) You don't immediately vomit from the overwhelming sweetness because phosphoric acid cuts the flavour, allowing you to keep it down.

Your blood sugar spikes, causing an insulin burst. Your liver responds to this by turning any sugar it can get its hands on into fat. (There’s plenty of that at this particular moment)

Caffeine absorption is complete. Your pupils dilate, your blood pressure rises, as a response your livers dumps more sugar into your bloodstream. The adenosine receptors in your brain are now blocked preventing drowsiness.

Your body ups your dopamine production stimulating the pleasure centres of your brain. This is physically the same way heroin works, by the way.

The phosphoric acid binds calcium, magnesium and zinc in your lower intestine, providing a further boost in metabolism. This is compounded by high doses of sugar and artificial sweeteners also increasing the urinary excretion of calcium.

The caffeine’s diuretic properties come into play. (It makes you have to pee.) It is now assured that you’ll evacuate the bonded calcium, magnesium and zinc that was headed to your bones as well as sodium, electrolyte and water.

As the rave inside of you dies down you’ll start to have a sugar crash. You may become irritable and/or sluggish. You’ve also now, literally, pissed away all the water that was in the Coke. But not before infusing it with valuable nutrients your body could have used for things like having the ability to hydrate your system or build strong bones and teeth."

... On his site, Naik writes: "I discovered that a trigger factor for many widespread diseases of the west such as obesity, heart disease and diabetes could be closely linked to the consumption of one particular substance found in many processed foods and drinks – fructose in the form of high fructose corn syrup.

"High fructose corn syrup is found in pretty much all processed foods such as ready meals, fast foods, sweets and fizzy drinks and most people are totally unaware of its danger."

...Naik also says "When I advised people to reduce their consumption of high fructose corn syrup by eating lower carb/higher protein diets free from processed foods, even if they say they are healthy options, they started to lose weight and feel much better as a result.

In many cases I asked people to just stop their consumption of fizzy drinks like Coca Cola and instead swap it with either plain water, or add some freshly squeezed lemon for flavor.

Green tea is also a great alternative, and it is one of my personal favorites because it contains alpha wave stimulating theanine that also double serves as an antidote to the harmful effects of caffeine.

Those who loved to drink tea and coffee sweetened with lots of sugar, I advised to swap with natural sweeteners like stevia instead. This alone had some remarkable results.

There are 1.6 billion servings of Coke sold each day worldwide!! A very significant percentage of that is through supermarket chains like WALMART."

You can read more here

As for me - I will continue my LCHF lifestyle ... my food template is lower carb, higher healthy fats and moderate protein. I have been living this lifestyle for seven years now and no complaints, now where's my glass of water?

All the best Jan
Posted by Lowcarb team member at 11:12

I refuse to drink coke or any pop... I tell my youngest all the time pop is evil... we drink water or milk. We both need to cut back on other sugars, I can attest to feeling so much better when I do... yet I fall back into old habits because they are easy. I'm sharing this post, it's important ♡

Wow this is incredible, and quite scary. I will be passing this on to family members.

Water with a squeeze of lemon, much better.

Coke is so scary! Also, the brown coloring has found to be carcinogenic. Higher in Pepsi than in Coke!

Thanks for the heads up on the additives Jan.
So any fizzy drink apart from cola is ok?

If only cola has phosphoric acid in, and no one vomits after any other fizzy drink without it, I guess the rest must be reasonably low sugar?

And caffeine free coffee and tea is the way to go, if caffeine is that awful?

Don't quite get that, as a lot of green teas have high caffeine, but maybe he didn't know that, or does he recommend any particular brand?

I need to share this with one particular person I share my life with. I have been trying to get him to give up this beverage for years!!! Thanks Jan!

oh my goodness! Thankfully, I don't drink coke that much at all. I have to cut down on sugar, so I definitely try to stay away from these sweet beverages. Thanks for the info. Jan. I do love a nice cold carbonated coke with Chinese food every now and then. :~)

Prior to my retirement, when talking to patients, I would always recommend water or milk. If plain water is not to your liking just add a little fresh lime or lemon juice to it. If you must buy ready made type drinks then a squash must be preferable diluted with water. The volume of the sugary drinks consumed now is out of control, many find a daily dosage of sugar is needed. Generally speaking it does not aid our health.

With regard to tea and coffee we need to be sensible a cup of tea, a cup of coffee in moderation and without added sugar can be enjoyed.

Thank goodness I have never cared much for soft drinks of any kind. Except ginger ale with I have an upset stomach. I once had a nurse friend who drank TEN Cokes every day. You would have thought a nurse would know better.

Hi Launna ... I do not have any sugary drinks in the house, this is of course not so easy if you have young family living with you. I do think that many consume far too much sugar, much of it almost 'hidden' in foods / drinks and people not aware.

Hello Annie ... water with a squeeze of lemon (or lime) is very refreshing.

Hi Amy ... interesting to read your comment. I do not have sugary drinks in the house, there seem to be so many available these days - perhaps it is just better not to drink any!

Hello Anonymous at 16.10 ... personally I do not buy any sugary drinks to have at home. However, on the very rare occasion I may have a 'diet' type coke when out but I am talking once or twice a year - these drinks are something I prefer not to drink. Libby at 'Ditch The Carbs' blog also had an interesting article you may want to have a look at here http://www.ditchthecarbs.com/2015/05/08/dont-be-fooled-by-green-branding/ I don't think any particular brand of green tea was mentioned other than to say ..."Green tea is also a great alternative, and it is one of my* personal favorites because it contains alpha wave stimulating theanine that also double serves as an antidote to the harmful effects of caffeine." Remember this is 'The Renegade Pharmacist' talking *. Do check out his full article and it may also be beneficial to read some of the comments he has received. With regard to drinking too much caffeine or opting for decaf - it has to be a personal choice.

Hi Denise ... I wish you well in your task to reduce 'his' beverage in take of this type of drink.

Hello Sheri ... I to stay away from the sugary drinks, but the occasional one shouldn't make you (or I) feel guilty.

Hi Kath ... well, I do agree with all your thoughts here. I do enjoy my cups of tea, without sugar but it is best not to have too many cups each day. As my dear mum used to say, if you want a drink there is plenty in the tap ... and I think these days the younger generation have got too used to holding their hands out to bottles!

Hello 'NC' ... gosh I can't imagine drinking ten cokes every day! I do think it is only in more recent times that we are all becoming far more aware of the damage sugar can cause to our health, if taken in excess. Hey, if you find ginger ale helps when you have an upset stomach then that has to be good ...

Many thanks to you all for your comments, they are appreciated.

Jan, thank you for stopping by and your kind comments.

I had no idea about pop and it's side affects. Now I'm not a pop drinker but my hubby is. I read some of this to him tonight, he sorta gave me the deer in the headlight look. He's thinking.

Take care my friend. Have a blessed weekend.

Hi TexWisGirl (aka Theresa) ... I think it's better for health to restrict the number of sugary drinks, so good for you! I think a drink of water either on it's own or with a squeeze of lemon juice can taste so good, especially when you've been doing thirsty work!

Hello Julie, so pleased to hear from you ... hope you are doing ok. Hope hubby can reduce his pop drinking ... in the long term I'm sure he will feel better for it. It's good that he is thinking about it.

... PS This post has received a lot of reads, and always good to receive comments and thoughts about this too - in the end it still comes down to individual choice.

Have a good week.

Fair enough Ivy - how about a glass of water with some lemon juice squeezed in?

Have a great week, and thanks for your comment.