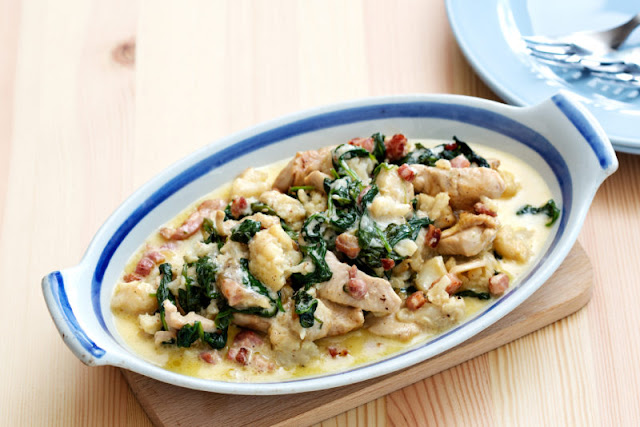 When you live the LCHF lifestyle you look for alternatives, or swaps, to foods like pasta and rice, for example take this Chicken in creamy Alfredo sauce. Instead of pasta it has been made with the lower carb alternative vegetable cauliflower, and it tastes good ...
Why not give it a try!

You will find the cooking instructions on Diet Doctor site here 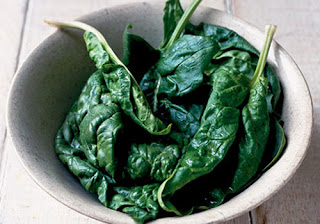 Spinach is believed to be of Persian origin. By the 12th century, it spread across Europe and became a desirable leafy green known for good health; a reputation that stands firm to this day. The name Florentine is often used to describe dishes containing spinach (and a creamy sauce). It is thought that this name dates back to the 16th century and the Italian wife of France's Henry II; Catherine de Medici. The unverified tale states that Catherine introduced spinach to the Court of France and to honour her Italian heritage, she then decided to call any dish containing spinach Florentine.

Spinach belongs to the chenopodiaceae family (also known as goosefoot), a family of nutritional powerhouses including beets, chard and quinoa. It shares a similar taste profile with these two other vegetables; the bitterness of beet greens and the slightly salty flavour of chard. There are three different types of spinach generally available: savoy, semi-savoy and smooth leaf.

The popeye effect:
There is much lore regarding spinach, most famously as the source of Popeye's strength. When faced with the sight of trouble, pipe-smoking sailor-man Popeye would burst open a tin of spinach. Once consumed, his biceps would bulge and his new found strength would see him overcome his enemies. Although there is definitely lots of goodness in those leaves, the legendary statue Popeye bestowed on it is slightly inflated.

Nutritional highlights:
Spinach is available all year round but is in season during the spring (March - June). It is well known for its nutritional qualities and has always been regarded as a plant with remarkable abilities to restore energy, increase vitality and improve the quality of the blood. There are sound reasons why spinach would produce such results, primarily the fact that it is rich in iron. Iron plays a central role in the function of red blood cells which help in transporting oxygen around the body, in energy production and DNA synthesis. Spinach is also an excellent source of vitamin K, vitamin A, vitamin C and folic acid as well as being a good source of manganese, magnesium, iron and vitamin B2. Vitamin K is important for maintaining bone health and it is difficult to find vegetables richer in vitamin K than spinach. Others include kale, broccoli and green cabbage.

We bring a variety of recipe ideas to this blog, and not all may be suitable for you. If you may have any food allergies, or underlying health issues these must always be taken into account. If you are a diabetic and not sure how certain foods may affect your blood sugars, test is best, i.e. use your meter.

Hope you may enjoy this dish soon

All the best Jan
Posted by Lowcarb team member at 12:10

Hello, this looks delicious. Thanks for sharing! Happy Monday, enjoy your new week!

What a wonderful idea!

I love Chicken Alfredo and Cauliflower Jan...this is a keeper!!!

It looks lovely and even though I don't follow a low carb diet, I wouldn't mind swapping the pasta for cauliflower.

This looks great, and I prefer cauliflower to pasta any day. Hugs, Valerie

Wow, what a dish! So delicious.

For me, it's cream that needs to be avoided, but I love spinach!

What wonderful information on spinach, thank you!

Great idea and it sure looks good. I love cauliflower.

I adore cauliflower and spinach. Cauliflower rice was a great find for me, and I suspect this would be too. Thank you. I will pass on the chicken though. And probably use yoghurt rather than cream.

Interesting reading re spinach, I have it fresh most of the year, it's so easy to grow. Cauli is a great substitute for pasta, good to be reminded to swop it now and then.xxx

I love spinach! This looks so good! Thank you! Hugs!