DCUK The Forum Of Flog The Fat Emperor or Suicide King ?

Meanwhile over at DCUK the forum of flog, a new low carb high fat hero has arrived on the scene the legendary Ivor Cummins AKA The Fat Emperor. He had barely stopped moving before he went straight for the jugular of the forums carb up and shoot up high priestess, the one and only Phoenix AKA Marie Antoinette. Long time flog watches know there is nothing Marie relishes more than meddling in type two diabetes threads. Long regarded as the cut and paste and dubious link information supremo, she was back to her old tricks. The Emperor was having none of it, and went straight on the attack. Flog regulars gasped, never had they seen the most protected one suffer such an arse whipping, surely a mod would be along any time soon and rescue the med shill from further punishment. How could this new upstart not be post edited, deleted or banned. What special powers does this new bringer of the 'force' possess, will the Emperor survive at the flog, or is he a suicide King. 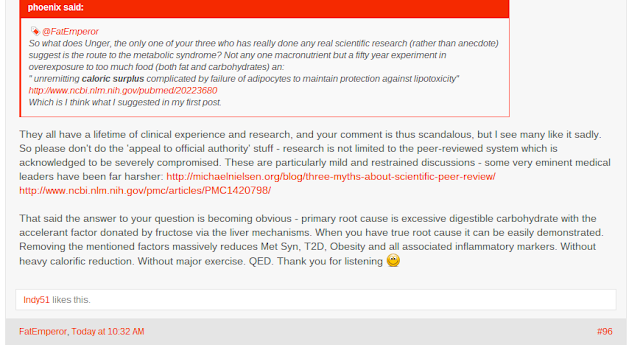 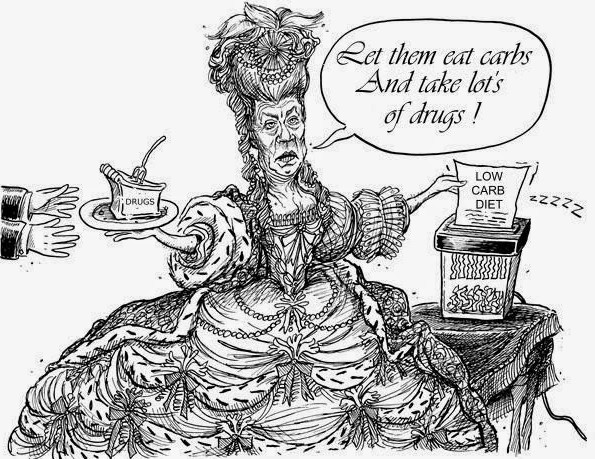 Posted by Lowcarb team member at 12:40

I read your postings on this strange forum with amusement - it's not my problem I suppose. The world is full of idioten and I am perfectly happy to get the news secondhand in this case. But be of good cheer, it is an example of evolution in action and it would qualify them to be nominated for a Darwin award; high carb diabetics are an inherently self limiting and short lived species. Plus all that wheat and beans must make them very grumpy.

Goota love Ivor Cummins. Here he is on someone else's blog, demolishing the blogger and the study he is championing

I commented on twitter that I was surprised at the credence you are affording this study. I have not the time to waste going through all the details, but will reproduce the comment I jotted down on my facebook page - perhaps you could deliver a high-level response to same - thanks.

"A little knowledge is a dangerous thing - so much is artfully wrong with this study.....it's unlikely to have happened by chance stupidity. This methodology is becoming common - comparing a ridiculously short-term isocalorific pseudo-low-carb (29%), to an ultra impossible low-fat (8%). It is becoming known that short-term ultra-low-fat (whilst ridiculous in real life), can generate the apparent effects that the experimenters are specifically mining for. Keeping the 'low-carb' not really low carb at all, enhances the errors, and tuning the timebase to be very short ensures no metabolic adjustment to allow benefit to accrue. The whole deceitful mess is massively magnified by eliminating the crucial hunger-driving factor from the equation. Yes, I suspect these guys know exactly what they are doing here; while it may not be direct remuneration, a question of motive is still pertinant. What is driving their deceit?"

I will read his blog next, with fava beans and a fine Chianti

I am only slightly confused/lost. I don't read or visit support blog "flogs" (I have never heard of that) or message boards that focus on illnesses of any kind. I gain my knowledge in other ways and support from my family. This comment only applies if I understand what you are talking about and I am only 50% sure that I do!!

Sorry about the confusion Debbie, the "flog" is a nickname that Eddie gave the DCUK diabetes forum due to the sales pitch aimed at diabetics