“I’m Afraid Your Mother Has Diabetes” 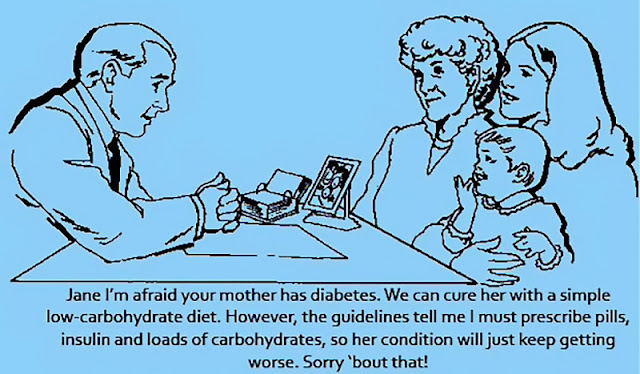 This is how type two diabetes works in the UK. Eddie
Posted by Lowcarb team member at 18:51

How many diabetics have heard these words?
It need not be this way.

It is so important to keep spreading the LCHF news. We still have quite a few more eyes and ears to open to this good news, but if we all do our best to continually spread the good news, more may improve their health.

Yup, happened to my mother, fortunately at the end of her life anyway. I came close to strangling the doctor who told her she "just had a touch of prediabetes" because her A1c was "only" 6.4, and that she should eat "lots of brown bread and fruit, that's really good!" when she had already seen how much my health had improved and stayed improved for then over five years of low carb.

That was the "diabetes expert" who decided to ignore her postprandial BG of 11 - 15 as "not diabetic". Other GPs have since agreed with her, but strangely since the PCT finally went away (a PCT was a bit like a Government-owned HMO) she seems to have been allowed to be more sensible.

The biggest joke was the doctor who was so fat she could barely make it up the front step and through the door, who told me sternly that "everybody has to eat lots of carbs or you have no energy". She also stated that "diabetes is always progressive, it's the nature of the disease" when it's obviously the nature of the treatment. Yet curiously when she became "prediabetic" herself she decided to lose a LOT of weight and "cure" herself. I hoped she might have low carbed but actually she was doing "5:2". Anything to keep cramming those carbs down her neck.

I wish more people would be measuring their post meal blood sugar. My mom had very high numbers after eating an oatmeal for her breakfast, but it was a way to start her on a LC diet.

Yes in most (but not all) forms of "Type 2" the postprandial numbers go south long before the fasting is affected, or it shows in the A1c

I suspect that many people who have high postprandial BS numbers would never have a clearly diagnosed D2, but their health would be suffering anyway, even though to smaller degree. It is one of reasons why I regularly visit that website. People think that there is a big difference between diabetics and the rest of population, and only diabetics have to worry about their blood sugar numbers, and the rest could be eating anything in moderation. I believe that a LC diet may be beneficial for a wider range of population.