Scientists find fossils of our ancient relative, who had surprisingly human-like features, in a remote cave near Johannesburg. In the today's Telegraph here. And to fit in with the news. 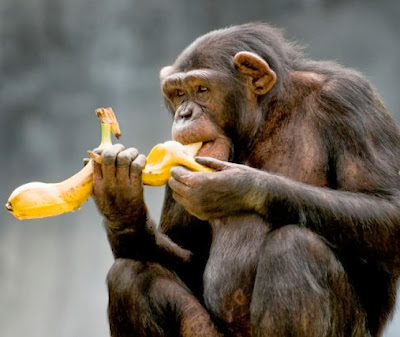 The world of anthropology was left completely stunned yesterday, when Professor Emeritus Sir Henry Cassandra Si Blenheim, announced he had discovered the gene mutation responsible for carb addiction. It had long been believed the typical low carb anti carboholic was mildly mentally deficient, but his peer reviewed studies proved beyond all doubt, the mind of the low carb anti is far less developed than previously believed, and is in fact equivalent to a well educated chimpanzee.

It appears, some time in the distant past a man mated with a chimp, and produced the defective gene. Sir Henry stated “although these carboholic low carb antis appeared to be human beings, and shared many traits, they have severe learning difficulties, which appears at this stage to be insurmountable.”

interesting and news to me!!!!

Thanks for visiting, Jan.

Have a blessed day.

Absolutely fascinating. Thank you for sharing this.

This will be the most interesting things I run across today :)

Hi,
I did hear about this on our Wisconsin news!