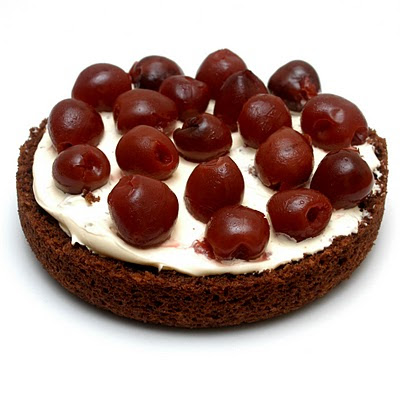 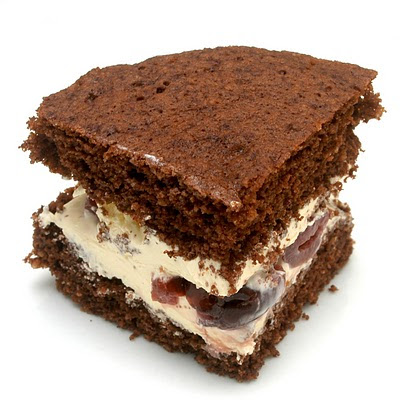 Method:
Mix all dry ingredients in a bowl.
Melt the butter I used a Pyrex jug, add the eggs, cream, then add the dry ingredients and mix. Pour into a 6" microwave proof dish. Microwave in a 700watt for 3 minutes. Allow to cool and cut in half. Spread on extra thick cream and 100 grams of pitted black cherries ... serves 4 / 6

I think the Sizzling Seventies most favourite dessert was the Black Forest Gateau, I used to love it ... and still do but nowadays I eat the low carb version as shown above.

It seemed to me that 'Dinner Parties' were popular and we would often eat 'Fondue's' ... with cheese fondue a great favourite! Cheese fondue is a great way to spend a nice evening with family and friends. Children also love to dip their fresh vegetables into delicious molten cheese.

In the 70's travel seemed to really take off, there were more cheap package holidays to Europe and many wanted to discover new places, and perhaps new tastes.

Spice racks became a kitchen must, and us would be cooks were more willing to experiment and try out these delicious spices.

Popular cooks in the 70's were Mary Berry and Delia, and of course both of them are still very popular today.

Can you remember the fashion? From the flares and platforms of the disco era to the Mohican type hairstyles and safety pins of punks. It certainly was a changeable decade.

... and who can forget the first showing of Star Wars, what a great series of films they turned out to be.

The seventies also saw a heatwave ... it was the summer of 1976 and Britain experienced the longest and hottest summer on record. Lack of rainfall and searing sunlight caused lush green lawns to burn and shrivel into dead carpets of brown wasteland while gaping cracks appeared in the parched soil. Hosepipe bans and water shortages were common in many parts of the country, although the story was different in rainy Scotland where there was still an abundance of stocks in the reservoirs.

Read more about the seventies here

All the best Jan
Posted by Lowcarb team member at 00:30

The dessert looks delicious, and it was fun reminiscing about the 70's! I do remember them!

Black Forest Gateau! Delicious. Yes, it was quite popular in the 70s and I still think it's very tasty. Spice racks were also very popular. Not sure if many people use them anymore. I know I don't. They collect dust and they seem like more trouble than they're worth. I still enjoy fondues, although mostly the chocolate type...with fresh fruit!

Oh, so many memories from that era. What a fun post this is!

My husband loves cheese fondue! He still eats it from time to time.

And let's not forget Saints won the cup in 76 too!
Smashing photo of your grandson on the pumpkin post. I saw a recipe for a pumpkin tart last year and wondered if I could get my lot to eat it, without telling them what it was. In the end I didn't, some things can be too tricky to get past them.
Lisa x

Amy, thank you for your comment. The low carb black forest gateau is a lovely recipe ... and sometimes it is fun to reminisce.

Martha, many thanks for your comment. Along with black forest gateau I think prawn cocktails were very popular too!
Agree with you spice racks can get quite dusty, and I think now more fresh herbs and spices are used. (Although no harm in having jars as a stand by)

Fondue's can provide such a friendly and informal fun evening ... so glad you liked the post.

Weekend-Windup, many thanks for your comment. Glad you liked the recipe idea.

Linda, many thanks for your comment. Fondue's are fun ... glad to hear your husband likes cheese fondue.

Lisa, thank you for your comment ... and yes, well done the Saints, AKA Southampton. UK. Football Club - for our overseas readers!
Many thanks for commenting about the Pumpkin post. It certainly was a lovely happy smile from our grandson, he's already looking forward to this years Pumpkin pick.

Nostalgia's not what it used to be... I'm afraid I remember all of the things you've mentioned! The summer of '75 was pretty good too, I seem to recall. For a minute, I thought you said Scotland had an abundance of storks.

Somehow I missed the Black Forest Gateau during the 70's--looks delicious! Thanks for a fun look back at this decade--I still have a spice rack just like the one pictured here:)

I could be tempted with a slice :-)
Amalia
xo

Mike, many thanks for your comment. Nice to know you remembered all the things I mentioned. Guess those of us who lived through the 70's each have our good and not so good memories.

Funny thing you mention storks and Scotland, I believe the last nesting pair of white storks was in Edinburgh in 1416 ... see Wikipedia here https://en.wikipedia.org/wiki/White_stork

Rose, thank you so much for your comment. Glad to hear you still have your spice rack ... must say my jars of mixed herbs and spices are now kept in a kitchen cupboard.

Why not make the low carb black forest gateau soon and enjoy a slice!

Amalia ... I will cut you a slice with pleasure, 'virtually' speaking of course !

omgoodness, I am drooling, nice recipes!! I use lazy Susan's I made for my spices, ones I made with marbles and cake pans!! I don't remember that spice rack!

Debbie, many thanks for your comment. So pleased you like the recipe. I think Lazy Susan's is a rotating dish / plate ... ?

Yum, again :) You do share some delicious delicacies. I just heard Hermit has a new girlfriend called Denise :)))

Things got so bad I predicted we needed a revolution - and indeed we had one. Unfortunately the wrong side won . . .

I really enjoy these posts when you look back, I can remember the 70's, I grew up in them. I remember the heatwave of '76, rushing home from school to get in the paddling pool which was set up the whole summer long. Such a different story this year. Black Forest Gateau seemed so exotic back then.

Denise, many thanks for your comment. Glad you liked the post - it can be fun to look back!

Yes, I too have heard that Kermit has a new girlfriend ... and what a lovely name too.
http://comicbook.com/2015/09/01/the-muppets-kermit-the-frogs-new-girlfriend-denise-first-look/

Yes, indeed Blue Nun was a favourite in our house along with Black Tower and Mateus Rose!
However, the 70's certainly wasn't all plain sailing - a lot of discontent.
Perhaps some of us cheered ourselves up watching 'Fawlty Towers'

Jo, so pleased to read you like these 'flashbacks'. It is sometimes good to look back ... perhaps we tend to remember the good / happier moments.
Boy it was hot in 76 wasn't it ... I didn't like the heat at all and any chance to cool down was good. A paddling pool, a cool drink was so welcoming.

Certainly the summer of 2015 in the UK will not be remembered for a heatwave !

Enjoy the rest of your week.

The seventies for me were graduation, marriage, the birth of two daughters and a career.

Thanks for your kind comments, Jan.

Gail, many thanks for your comment. The seventies were certainly a busy and exciting few years for you ... and of course they continue!

I just read through the whole of the Past Times Project on the 20th Century. Hugely interesting to see a brief digest of the times my mother lived through (born in 1915) and her mother before her (born in 1885) and correlate them with her old diaries, let alone all that happened since I was born (1950s)

Yup I remember the Drought, and one day driving back from a run almost to Cornwall and back, stopping in a pub just before I got back to the truck yard and pouring down a pint almost without it touching the sides of my throat. Yet people were still being refused service in other pubs for not wearing a tie . . .

Chris ... I think it can be good to look back, and see the good and bad and how things have developed. I also think it good if we can talk to family / friends from different generations and exchange memories. I think schools do this much more these days and also visit the stately home type house and museums where they bring History alive - so to speak.

Dress code has changed over the years ... sometimes not for the better - but then perhaps I'm getting older ...?

The drought of 76 and the storms of October 87 will stay forever in my mind ...

My mother loved Deep History, as does my cousin. I always focussed more on the changes since the Industrial Revolution and the evolution of technology.

You probably don't remember the long cold winter of 62/63. My parents recalled those of 1941 and 1947 too. My ex-farmer neighbour was a mine of information too, and I remember sitting on a banch in the park with someone else I'd just bumped into while he told me tales of trying to drain the marshes while the ground was frozen solid.

There are some diabetes stories from the past here

Chris thank you so much for all your comments here, and your link.

I do remember the cold winter of 62/63, but they were from the eyes of a child playing happily in the snow with family and friends. Although I can remember taking a step and suddenly found myself much deeper in the snow than my previous step ... quite un-nerving!

Chris - regarding the CAPTCHA. There are indeed some unusual pictures, street signs. lakes, kayaks, candy, waffles and sometimes numbers to choose from. It's all part of the 'intrigue' when posting a comment... which we are always pleased to receive them.

So sorry Chris but you do realise we need to make the anti's feel at home, after a life time of low fat high carb wheelchairs are something they can relate too.