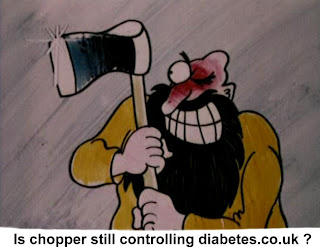 Posted by Lowcarb team member at 12:59

If you're talking about this morning's fiasco, then I think it was just Ken and/or some of his trusty stooges trying to stir up trouble. Again.

If only they cared about helping diabetics as much as they care about their own egos.

That cesspit of a forum seems to tolerate the Clique with a loyalty that defies belief!

One has to assume there's some vested interest at play here! Perhaps there's some cosy arrangement that brings income and must be protected at all costs? I'm at a loss to understand what's affoot otherwise.

I was referring to the locked thread and also the excellent lowcarb discussion and debate on the thread that has disappeared.

"I was referring to the locked thread and also the excellent lowcarb discussion and debate on the thread that has disappeared.
"

So was I! Whenever the chosen few come under pressure the thread gets locked or worse.

I see questions are being asked by others now. (It has to be others - we're all banned!!)

I’m watching this situation closely. If that thread stays disappeared, or returns in a much edited form, it’s says much about the forum, and diabetes.co.uk’s motives.

"If there's "An incident" why not delete, or edit the offending post? It looks quite Orwellian to remove the entire thread!"

This was followed by:

How can someone be "...not allowed to say anymore"?

Why these people play around and argue about minor details, people are losing limbs, going blind and suffering kidney faluire.

Almost a hundred % down to the ludicrous dietary recommendations from the NHS, DUK and a few carb addicted misfits, what a tragedy.

You're right Eddie. The whole thing reminded me of something:

“If you tell a lie big enough and keep repeating it, people will eventually come to believe it. The lie can be maintained only for such time as the State can shield the people from the political, economic and/or military consequences of the lie. It thus becomes vitally important for the State to use all of its powers to repress dissent, for the truth is the mortal enemy of the lie, and thus by extension, the truth is the greatest enemy of the State.”

Have you seen the latest.

"My thoughts exactly, bit suspicious as a first post....."

From the alleged Karen aka chocfish.

It's a total farce for sure.

"As for why it has disappeared, I have no idea, all I said was that it had gone way off topic and turned into an NHS rant and that I didnt know what xxxy was talking about so here is a picture of a rabbit with a pancake on its head."

Typical of Sid he a subtle as a fart in a space helmet!

On a serious note he has shown that his bully boy approach has the effect of driving members away from the forum. On one thread he succeded in doing just that!

A new member embarking on a Newcastle type diet has never been back since Sids intervention, when he could have been getting help from others trying this approach he's probably now going it alone.

"Aiming to 'reverse my diabetes' on Tony Ferguson"

"Sorry to sound so harsh, I am just sick of all the Newcastle Study type diets, I have no doubt they work as I have tried one in the past but they do not last and they will not cure diabetes.
I'm just getting bored with this now"

"I'm just going by what a doctor told me was possible from his first hand experience."

He's never been back since.

We both know it was ever thus! Why? I don't know! The long list of posters bears testament to those who were befor us and no longer post is a sad testament to the power of big money and the likes of the clique