ETYM a forum or a very exclusive club ?

When the hardest fighters for the lowcarb cause, in recent times were banned from diabetes.co.uk, the guys set up a forum of their own. Great I thought, we need a set of pipe wielding, blow torch holding set of lowcarbers, setting up a much needed lowcarb forum in the UK. Not only that they invited me, a lowcarb member of the Hezbollah to join them. Let’s get at it I thought, lets kick some lowcarb anti butt ! how wrong could I be. From the start it was doomed to failure. After kicking butt at diabetes.co.uk, and taking on every lowcarb anti that posted, they pushed a diet to newbie’s along the lines of DUK and the NHS. Sid Bonkers must have turned in his crypt. Who would have believed, Sid’s portion control, low GI diet would be the order of the day. Check this out from the advice thread for the newly diagnosed.

“On the starchy foods that are left in your regime, try brown basmati rice, and brown or tri-colour pasta, instead of white. A couple of baby new potatoes boiled are far better than old potatoes, be they boiled, mashed or in their jackets. The bread that is most recommended is Burgen Soya and linseed bread, but some of us manage ok with wholegrain brown as well.”

How many of the forum owners, and well controlled members are eating brown rice, brown pasta, new potatoes, and any kind of bread other than flax/linseed ? answer one, Grazer ! All the very well controlled i.e low fives and fours would not touch this sort of food with a ten foot pole. When I pointed this out, a feeling of Déjà Vu came over me. I was back at the forum of flog, diabetes.co.uk, fighting for my life.  Had these staunch lowcarb warriors taken a bribe from big pharma and junk food ? had they gone batshit ? Who can tell, but what have they achieved in the last nine months.

Well, they have alienated many of the first to join lowcarb members, many with years of great diabetes control under their belts. They have followed the worst aspects of the forum of flog, with post deletion, thread locking etc, they fought so hard against at the flog. They have become a cakes and commiserations club. But, they have done worse. The excruciatingly boring and mainstay of the forum in recent times, the members blogs, cannot be seen by a visitor, trust me that’s a bonus. But after my recent comment here, re. the members list, and how most have left, many have never posted and pages of clearly spoof members etc. What was their mind blowing response ? Make the members list unavailable to visitors. The question I find myself asking is, how long before no-one can see anything ? Now, that’s what I call a one hell of an exclusive club. Remember the big forum ethos at the start, was total transparency and honesty for the members, it seemed to good to be true, and by golly it was. For the first time in their lives, some of the owners had a little bit of authority and power, jeez did it go to their heads. 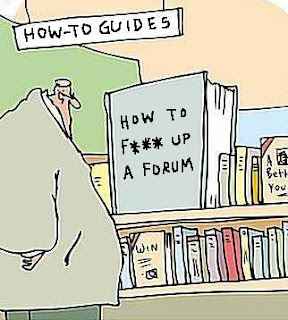 Being conscientious sorts, they decided to do things by the book.

PS. I see the General Discussions section, seems to be members only job now, oh dear.
Posted by Lowcarb team member at 09:48

They don't seem to be able to take constructive criticism or allow their egos to take a back seat. These were the things that got people's backs up on DCUK . There is no point in pretending that they have what it takes to run a forum, you have to listen to the posters. Being in charge does not mean that you can ride roughshod over members.
As for hiding certain sections from non members, what is the point. People need to make an informed choice before joining a forum so if you have to hide things away from them, why would they bother to join?

Even with all the members poached from DCUK, their success is proving elusive. They either have to take stock and treat other members as people rather than idiots or they will go under. They have some experience of their own management but it is not for everyone. They will only ever attract low carbers and they won't stay long once they get to know the egotists are in charge. They say it is not a low carber's forum, yeah right. How many members do not low carb? How many members actually post? How many members have given up?

I see Choco is imploring guests to join the Forum of Doom.
She must see something that we don't. Maybe she finds the blogs of interest. lol

While I agree with much of the first comment I never get this poaching members thing. When we join a forum its not a contract to read or post on that forum and no other. There's room for all - and for others too.
They would all be the poorer if people were restricted to just one place.
Even those who do stick to one benefit from information posted on others.
If people choose to no longer post on a forum because they have
issues wih it for any reason that is their choice.
They don't owe anyhing to any particular forum and most will happily use several..

I think the poaching method was at fault.They came to DCUK, not to post or to answer posts but with the express purpose of courting members for their new forum via p.m..
Of course it doesn't matter how many forums you belong to but they were so enraged by DCUK and it's members standing up to them that they were sneaky.
I think they are now getting Karma.
They need to shut their mouths and let their members post, especially Grazer. He needs to find out what free speech means.

Choco's thread is getting longer and they are advertising themselves as a friendly bunch. WTF does that mean?
Did it escape their notice about the way that Eddie and Blinkered were treated? That was when I decided to leave ETYM. I can get enough aggro at work without it being dished out on a support forum.

Defren reckons it is the weather that has stopped people posting. Dream on Jo.

a. The public square or marketplace of an ancient Roman city that was the assembly place for judicial activity and public business.
b. A public meeting place for open discussion.
c. A medium for open discussion or voicing of ideas, such as a newspaper, a radio or television program, or a website.

"open discussion or voicing of ideas"

Is the last thing the board want, I proved that months ago, maybe, just maybe, that is why so many checked out in the first few months.

We don't feel it is pointless, we believe it is for the best of the forum. It is not a case of hiding anything, more a case of giving members freedom to say what they wish, that is also the reason we took the blogs from general view and made those members only. This is not a decision that was made lightly, but in the end after a recommendation from a member it was one we felt was best for the entire membership of the forum.

One member changes the forum for all the members. That rubbish.

I agree. I give up! I'm leaving it too. It's going from bad to worse

You cannot have all the chiefs on an ego trip and not have discontented members. They are biased in the extreme, full of crap and don't know how to run a forum. It is supposed to be for the members, not people who consider themselves the elite.

Decision making has to be discussed with the members not just the chosen few.

Anyone would think that the members were a load of idiots having decisions made for them.
Treat people with respect ETYM Board and don't be so cocky. You think you know best about everything and yet you have not been diagnosed long.
Listen and you will learn from members, ignore them and you will rue the day.

A simple honest apology would have sufficed a few weeks ago, but they blew it completely. They tried to blame and besmirch me. The members could see the truth and are not the mugs certain board members took them for. As each hour passes they dig a deeper hole, when it is plain to see, straight answers are not forthcoming and the skulduggery continues. Why don’t any of those brave anon board members come over here and debate the issues ? The unhappy members know why !

I am one of the so called mugs who enjoys the forum which you denigrate so often. I did write to Eddie explaining that I do not enjoy reading posts written in language that I would not accept in my home. He did not deign to reply. I know that the forum to which I belong is by no means perfect, but I will be staying.

I am one of the so called mugs who enjoys the forum which you denigrate so often. I did write to Eddie explaining that I do not enjoy reading posts written in language that I would not accept in my home. He did not deign to reply. I know that the forum to which I belong is by no means perfect, but I will be staying."

Ruth I do recall your PM to me regarding the starred out swear word which was a famous quote from the Al Pachino film Scarface. I was in such a sate of shock from your chastisement I had to go and have a lay down. I am sure you realise, I am a man of delicate disposition. What really shocked was the comments you made about “burning what was left of my husband” due to his diabetic complications. May I respectfully suggest you spend more time getting your own diabetes under control and helping others do the same, rather that fret about a starred out swear word. I see it as a question of priorities, but you may have other ideas. BTW Why don’t you post the PM on the forum, I am sure it will serve as a warning to others.