More Skulduggery from the artiste formally known as the ETYM Forum.

The ETYM forum now known as diabetes support forum.org have taken thread locking, members post deletion and under handedness to a new level. Last night at the request from some of the forum members, I returned to the forum. I didn’t know my recent banning had ended, until I received an email from a forum friend. Against my better judgement I went back, head first into a shit storm. One thing is for sure, I am persona non grata at the forum. The attack dog forum owners went straight on the offensive, locked two threads and started a rubbish Eddie campaign. Well, they went for the jugular and so did I. I had known for some time, in fact right from the start of the forum, the PM system was less than 100% secure, hotly denied by the owners. I posted this post this evening, it was deleted in less than five minutes.

The $64000 question is why do they fear to discuss the issues with me, why are mine and other members posts deleted, and why is the truth not wanted at the forum ? They accuse me of bullying, while acting like Stalinist dictators. They can say what they like, but delete any replies that shine the spotlight on lies and skulduggery. This one is going to run, stay tuned for more on the forum of fantasy !

“If he starts emailing members with sexual innuendos or is deliberately rude to people, particularly those who may be vulnerable, he'll be banned again. Simple.”

That would imply to any thinking person I had been banned for accosting members via emails or bullying vulnerable members of the forum. Nothing could be further from the truth. I was banned for stating what I thought was wrong with the forum (especially the forum name) and agreeing with Blinkered’s post regarding the forum looking like an index of personal blogs. Blinkered got a hard time from some members and some board members. How ironic that within days, the forum name was changed and Blinkered’s recommendations were followed.

So, an explanation regarding Grazer’s twisting of the truth. When the forum was starting up, a huge amount of emails was being generated, I was copied in on them all. I am not exaggerating when I say more than twenty emails were coming in some hours. I hardly had time to read them, and requested I be taken off the email copying list, it was a joke. Much of the emails concerned petty squabbling over this and that. Who would have this or that authority, who would have this or that power. Most of it was dross, but this one had me complaining bitterly. It was one of several emails for what I cynically called who would have the key to the box of secrets or the like.

I would just like to add / clarify the following as I know there were a couple of outstanding questions on my forum post last time I checked.

1. Subject to Scott's confirmation that a) we (the board) can access PMs in extenuating circumstances and b) the boards agreement to utilise a PM system; all day-to-day communication between individuals moderators / board members and the member-base will be via in forum PM.

Is that your idea of a secure PM facility ? Who ended up with the key to the box of secrets ? Who had access to the tracking logs ?

Defren implied recently I jumped before I was pushed, regarding my resignation as a board member, again not true. In fact I had to threaten to expose the situation on our blog, if the members were  not informed within three days I had resigned.. No explanation or official comment was made regarding Dillinger resigning until I mentioned it. Same re Borofergie.

So, what about this gruesomely offensive joke I sent to all the board members. Remember, I was being bombarded with emails around the clock ! Well, from memory the most busy emailer had been Defren, I was genuinely amazed at her capacity and energy for work. So I sent an email copied to all board members, saying I would like Defren in bed with me and my wife, nothing kinky,  I just wanted to attach some jump leads to her for some extra energy. I had mistakenly thought Defren was one of the guys so to speak, I was very wrong. So much wailing went up you would have thought I had caused world war three. I apologised, end of, not on your life. Like I said, if you can’t delete posts, lock threads and ban, start a smear campaign. How brave of you Grazer, what a class act you turned out to be. While we on the subject of Eddie the bad boy, think on this. If I was such a trouble maker and bully on this forum, how come my thank you ratio to posts made, exceeds the five named people in the stats. 2.1 posts per thank you. Bear in mind I have not posted much in months and others have made posts in the thousands.

To conclude I am out of here, as more than one board member said yesterday “You flatter yourself; we don't need you.” and “I echo what Grazer has said Eddie” It’s true the forum does not need me, it appears the forum needs no one, other than a bunch of feuding owners, and an ethos more reminiscent of diabetes.co.uk in the Cugila era. So many good and knowledgeable long term diabetics checked out months ago. The forum will not be saved by trying to cash in, on another almost identical well established forums name, or some minor cosmetic changes. The forum needs a complete re-think and a lot more transparency and honesty, otherwise it is doomed. Sure you can struggle on for years, but as a good diabetes forum, I don’t think so. 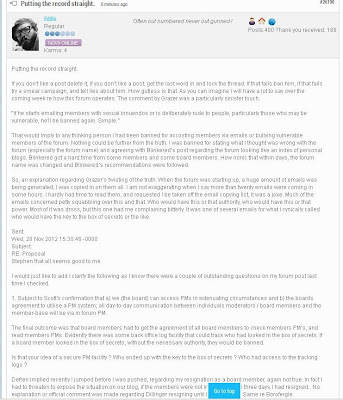 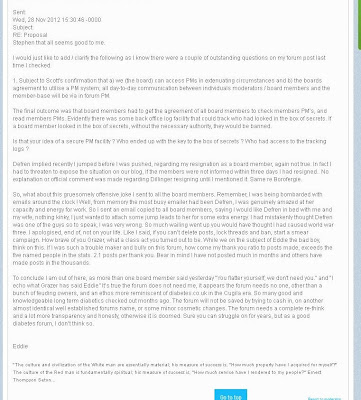 Looks like the peasants are revolting on ETYM tonight. What have you started? lol

A brother in arms.

I like most of the peasants, I am one of them. It's the lying robber Barons that get up my nose.

Eddie you are an idiot you ruin whatever you get involved in - walk away close this moronic blog down and retire as no one wants you well apart from the three fools who follow you!

You bring all this on yourself and I do feel very sorry for your wife must be hard to keep up this nonsense - embaressing!!

sensible said...
"Eddie you are an idiot you ruin whatever you get involved in - walk away close this moronic blog down and retire as no one wants you well apart from the three fools who follow you!

You bring all this on yourself and I do feel very sorry for your wife must be hard to keep up this nonsense - embaressing!!"

What meds are you on? bit of a cheap dig IMO..if you have an opinion then do it on the forum/s or at least with a reconisable forum name if you post here or elsewhere.

It's quite clear from what you have quoted that the PM runs the same as any other site, all you are doing is causing trouble and embarrassing yourself.

Why am I smelling the shit of the bull. You missed the point sunshine, the PM system is not that important, but exposed the lies and BS. Most members can see it all, well they can now !

Anonymous said...
"It's quite clear from what you have quoted that the PM runs the same as any other site, all you are doing is causing trouble and embarrassing yourself."

"Eddie you are an idiot you ruin whatever you get involved in - walk away close this moronic blog down and retire as no one wants you well apart from the three fools who follow you!

Do you really think Eddie is going to take any notice of an anonymous moron like you, even if he walked he could not close this blog down without the consensus of fellow team members.

"Nobody wants you" sorry sunshine but the stats and 39 followers don't agree with your idiotic assumption, Clowns like you make all our efforts worthwhile and proves yet again were targeting all the right people!

You bring all this on yourself and I do feel very sorry for your wife must be hard to keep up this nonsense - embaressing!!

You don't need to feel sorry for Eddie's wife as she is also an active team member and contributes to this blog, wonder what she will make of your spelling !!

omg - a spelling mistake! The numbers looking at this blog and the lack of actual posters, apart from the usual culprits, clearly show people are looking for a laugh. Eddie is about to implode again - there is a pattern! Eddie ruins everything he goes on and this is still here because it is his! I do feel sorry for Jan cannot be easy living with him!

I thought you at least had some sense and brains. Any website or company for that matter can access anything you enter into there systems, including pm's, emails, telephone numbers, address, etc.

There employees would have the exact same statement , of course we agreed not to just read them why would'nt we, it's called acting responsibily.

Only 2 people would know how too as its stored n the database, you cannot just go and look..

Eddie, if you have so much of an issue the just get lost.

And if you want to play like that, then I am telling you now remove all screenshots and quotes from our website from your site, as it violates our copyright as stated at the bottom of our website clearly.

Blogger has a form that is clearly for this in accordance with the DMCA..

"I do feel sorry for Jan cannot be easy living with him!"

Thanks for your comment and those from others concerning my welfare on how I put up with Eddie. He's a pussycat really LOL. As Eddie would say it's one tough gig but someone has to do it!

Seriously though all of the team here believe in the low carb high fat lifestyle it's what we are about and it's what we do. None of us will be detracted from spreading this message in the hope that we will help others to a healthier life.

As a crony as you put it pal I've not said much on this debate but hey you've invited me in.

And if you want to play like that, then I am telling you now remove all screenshots and quotes from our website from your site, as it violates our copyright as stated at the bottom of our website clearly.

Really! the screen shot is a post authored by Eddie and as your notice clearly states all messages are copyright of their authors.

insensible idiot said...
Eddie ruins everything he goes on and this is still here because it is his!

Do you want to put money on that sunshine, like I said previously Eddie could not shut this blog down even if he wanted to.

Your not one of carbo/I'm not tubolard's commentators are you?