Paul Nuki of NHS Choices in the running for our Buffoon of the year award !

One of our Guru's Dr. John Briffa wrote to NHS Choices commenting on lamentable information regarding diets and carb recommendations " ‘article’ put a very biased, unbalanced and potentially misleading case for carbohydrate in the diet"  Their response and John's comment.

"On the 6th January 2014 I received a response from NHS Choices, acknowledging my complaint, and saying that my query had been passed to the ‘Subject Matter Expert’ at NHS Choices. It’s now 2 months since I made my original complaint, and I am still to receive a reply that addresses my concerns.
In the meantime, though, the chief editor of the NHS Choices website, Paul Nuki, had time to describe (on twitter) those who express doubt about the NHS Choices advice about carbohydrate as ‘quacks’. Here’s a screenshot of his tweet, a couple of responses to it (including one from me), and then Paul Nuki’s (in my opinion) tired, lame ‘balanced diet’ line." 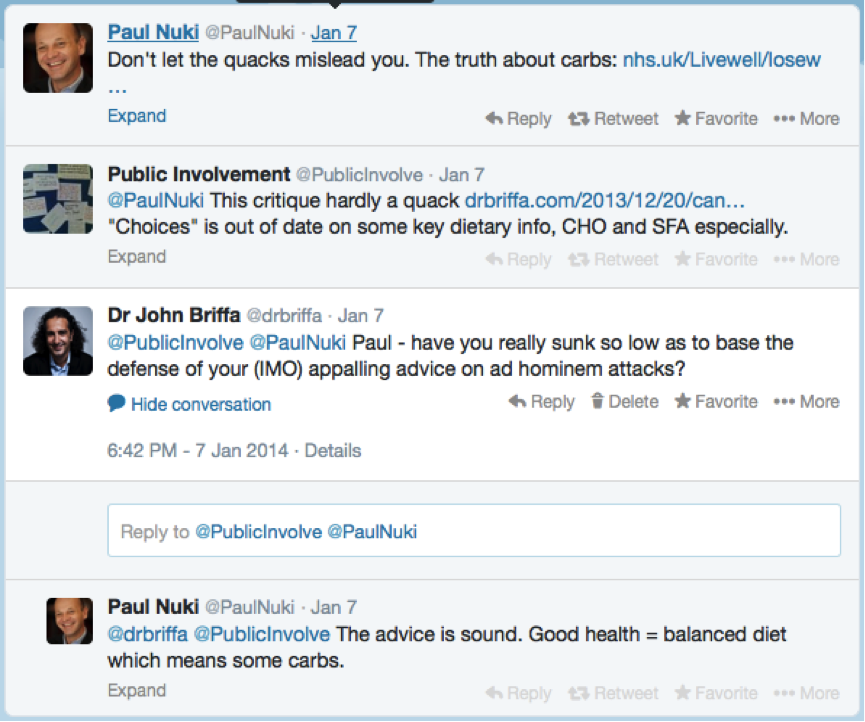 Clearly Paul Nuki of NHS Choices is a complete buffoon and not a fit person to issue advice to the Nation in my opinion. The MD of choices is now on the case and posted on John's blog the following.

"I’m the Managing Director for NHS Choices. You should have had a reply and I’ll find out why you haven’t. Thanks for alerting us.
Jonathon Carr-Brown"
With people like Nuki handing out advice, is it any wonder the NHS cannot get 93% of type one diabetics to a safe HbA1c. (official NHS diabetes stats) The situation for type two diabetics is also woefully short of even satisfactory. Is Nuki being paid to act the clown and court jester, and if so how much of our money is this chump receiving, we need to be told ?
Full story here.
Eddie
Posted by Lowcarb team member at 13:22

And again it shows we need knowledgeable Drs like Briffa to keep fully in touch with what is going on.
James