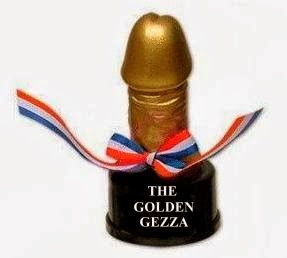 In a special all night sitting of the board of trustees the vote was unanimous. The trustees agreed after little deliberation Charles Grashow is the most annoying person to grace the world of diet related blogging in a long time.

Chairman of the board of trustees. Roger (keto warrior) Jenkins stated today “The low carb antis have spouted complete bollocks for years, but Grashow has taken total bullcrap to a new level. Even when he falls down a sinkhole he never stops digging, this nutter has to have the last word, even when he is wrong, he's completely batshit"

Lord Beantipper was less complimentary and clearly wound up said "Grashow is a complete menace, and it is very clear to see he is straight out of the Carbsane camp, monumental noise but nothing new to say. Only yesterday he was Tweeting grief at Tim Noakes" he went on to say "the last straw for the trustees came when Grashow became the first person ever to be banned from the great Dr. Michael Eades blog"

"So, you, my friend, are going to be the recipient of the award for being the first person I’ve ever blocked from my blog. I would hate to have the responsibility of exposing you to any information that would be useless" Posted here.

So there you have it folks, where will Grashow turn up next ? who will be the next blogger to ban him ? Have we heard the last from Grizzly Grashow ? Is the man beyond redemption ? Will he end his days in the elephants grave yard, known as the Carbsane asylum for the doomed talking to himself ?

Posted by Lowcarb team member at 13:12

lol, RN whining on Mike's blog about how Charles is soooo mean to him? RHOLC!

RN is over at Carbsane's blog making up. Jeez what he was calling her a year ago. I expect they will be waxing lyrical over each others books soon.

A marriage made in hell eh !

Eddie, please, take what I am about to say as a friendly suggestion, rather than a criticism made with brows raised high.
I have been thinking for a while that many bloggers make themselves less creditable by practicing name calling and trying to insult their opponents.

Imagine, some lady with diabetes who is interested in the learning more about the diet approach your team promotes, type the web-address of your site in the morning when the gold male private part is featured in the honor of Charles G.. What if a person at work would open your site on that page, especially while somebody else is looking? The chance is, they would be very unpleasantly surprised and get a negative perception of your credibility. Such form of expressing your opinion makes you more vulnerable and your ideas more easy to dismiss. I guess, you had a lot of fan looking for a fitting picture, and you are having even more fan featuring it, but thinking about credibility is important in your case. You are not some blogger who just places whatever thoughts she/he has in mind on a web just because there is no one around to share such thoughts with.
Please, be assured, it was said kindly and with your best interests in mind .

I take on board your comments and agree with you, but here is the reality of the situation. People love the aggro and bun fights. Look on the front page of the blog as it stands, almost all the comments are on the wind up and butt kicking threads.

Many times we have published links to papers and studies that we thought would get lot's of comments. We were wrong, but people do read many of the 'quality posts' but chose not to comment. The only people we wind up deserve all they get. I appreciate you are a very polite person, but the Carbsane's and Grashow's of this world are pond life and do a lot of harm, and waste a lot of peoples time.

So the game is supply a bit of entertainment and when people turn up they read the good stuff. We average over a thousand page views per day. In a week or so I will be having a long break from this blog. I might never post again, the blog will be a grief free zone, and I can guarantee you the page view count will plummet.

BTW Our non controversial word press blog gets around the same page views per month as this blog gets in a day. I am hoping to change that.

Thanks for all your comments.

Galena, it really is ok to say 'penis' because that's what it is.

I would completely agree with you if it were a pornographic type picture of an erect penis, but it's not, it's just a bit of fun.

Just a bit of fun ! That 'penis' was made from a mould of Monty Beantippers member, have a bit of respect PLEASE !

@Wiflid,
I initially printed "penis", but the spell-check indicated I did a mistake, a printed "fallos" then, another mistake according to the spell-check, I figured out that they just didn't have some words in a data base, and choose to use "a male private part" instead to be on a safe side. As a not-native English speaker, I am not always sure even about simple words.

Wait. I thought that WAS an erect penis.

I have a suggestion - when you place an interesting study, start the discussion on a blog post like Peter the Hyperlipid does, or Tom from fathead-movie.com blog, not just the study description. I believe the style of study presentation makes the difference here. People discuss studies, maybe it is worth effort to investigate what is the trigger.

I don't try to protect Charles from you - it looks like he enjoys having ban-fights here, he is a generally healthy man with a hobby of looking for the modern alternative of ancient quest for the fountain of youth - the perfect diet which would fix not perfect genes. He is a willing volunteering participant, if saying he is maroon brings readers, I have no objections. I just want to protect unsuspected visitors from the staring unprepared on a shiny penis. I am talking about a degree here.
I have already mentioned that bulling Carbsane for her metabolic situation was not really fear. Weight loss is a complicated issue. I am happy that loosing 30 lb was enough for me, or I would be trapped too.

I bully her because she bullies others. Clearly you feel Carbsane can do and say what she likes and that's OK. When someone is obese what right have they got to ridicule others.

Why are you so afraid of Evelyn Kocur. She has rubbished countless people, have you took her to task ? No, I doubt that very much ! She has done untold damage to low carb cause and you think she is hard done by, give me a break.

I am not afraid, just I can imagine myself in that situation. I wish JM wouldn't be blamed unfairly as well for something he has no control over. People say his diet is to blame for his metabolic condition without ignoring there is much more in his condition that just wrong choices. I don't believe that people choose to be fat. I also disagree with Evelyn's denial of the value of LCarbing just because it didn't help her case.

Charles, so chuffed to hear you are pleased with your Golden Gezza award. No one has been a more deserving recipient. You have worked so hard for the award, and credit must be given, where credit is due.

Display the Gezza with pride and BTW, I hear another prestigious award is coming your way tomorrow. You have been a busy boy lately haven't you.

I just read that Charles was the first person ever banned from Dr.Eades blog. Poor doc had to take trouble to investigate how to ban people first. Charles, I think it is a clear hint that you are doing something wrong, or whatever right you are doing is done in a wrong way.

Please understand this - I don't give a royal, flying, flaming fuck what the good Dr does!! It makes absolutely no difference in my life at all.

I read a lot of blogs, twitter accounts, etc. The majority are worthless

We live among people and virtual reality is not an exception, just we have a virtual life in addition to a real life nowadays. Having an aggravating personality is a disadvantage in a real life too, and I am sure even involves some health risks. On another hand, personality is harder to change than loosing weight.

Hi Christopher thank you for your comment. As you would imagine, I don't give a flying fuck for what Richard thinks of me.

I think Richards a fruitcake.