Featured food of the day Cauliflower 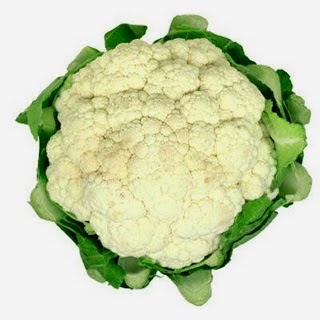 The cauliflower is one of the most versatile foods in the low carbers recipe book. From cauliflower cheese to finely grated as a rice substitute or mash with butter and use as a topping for shepherds and fish pies etc. With minimal carb content and over three times the vitamin C as potatoes, a truly great food. 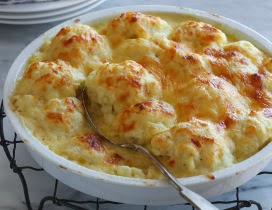 Steam the cauliflower (in a colander over a pan of boiling water) until a fork passes easily through the stems. Remove to a baking dish and discard the water.

Pour the cream, cheese (reserve some to sprinkle over the dish) and mustard into the pan over a medium heat and stir until the cheese is melted. Remove from the heat and whisk in the egg. Now pour the mixture over the cauliflower and sprinkle the remaining cheese over the top. Bake in a fan oven at 170 until the cauliflower is golden brown (30-35 minutes).

Cauliflower traces its ancestry to the wild cabbage, a plant thought to have originated in ancient Asia Minor, which resembled kale or collards more than the vegetable that we now know it to be.

The cauliflower went through many transformations and reappeared in the Mediterranean region, where it has been an important vegetable in Turkey and Italy since at least 600 B.C.

It gained popularity in France in the mid-16th century and was subsequently cultivated in Northern Europe and the British Isles. The United States, France, Italy, India, and China are countries that produce significant amounts of cauliflower.

More great cauliflower information can be found at theWorlds Healthiest Foods site here. WHF is a not for profit goldmine of great food information.

Posted by Lowcarb team member at 09:15

Cauliflower rice so much better than 'white rice, the cauliflower is great for low carb, and better nutritionally.

Just home and reading some of your posts today, like the look of the cauliflower cheese recipe, thanks.

Many thanks for once again stopping by to comment.

Cauliflower is always included in my weekly shop and that cauliflower cheese recipe is a winner.